The now forgotten tale of Thomas Lamb and the Bell Alley church
of Christ.

By trade Lamb was a "boiler of soap", he was the evangelist and one of two elders for the above congregation. He baptised many people for the remission of sins in the 'pool of London', part of the river Thames near Traitors Gate, The Tower of London. 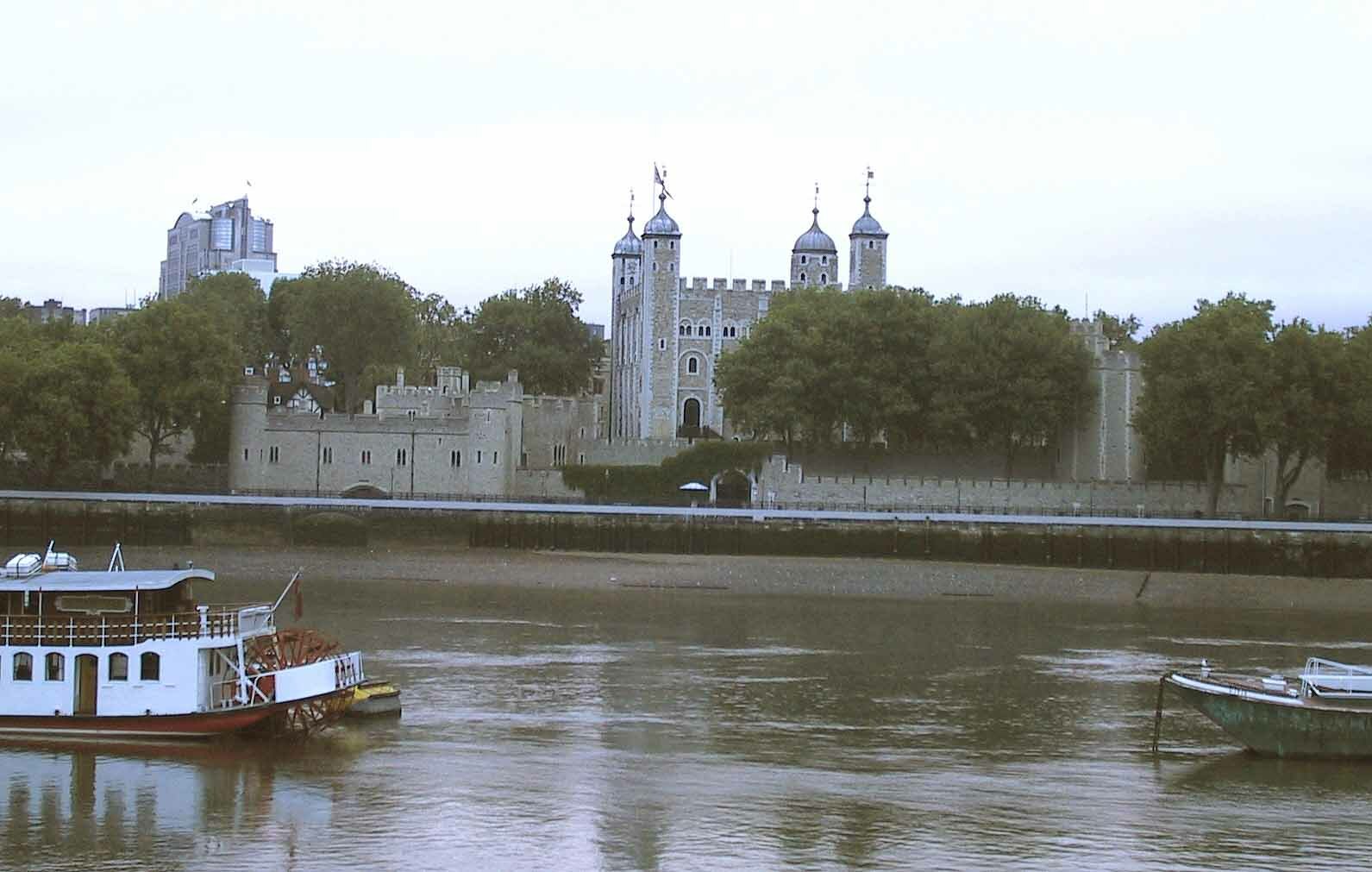 Thomas Lamb was born in Colchester, a city in southeast England, being named after the ancient king – Cole, of nursery rhyme fame.

We are fortunate to know a little about Lamb and his family. Lamb was arrested at Colchester and brought to London to appear before the courts of the Star Chamber, his wife speaking on his, and their eight children’s behalf.  The Anglican Archbishop Laud quickly resolved the defence brought by Lamb’s wife, by having “the troublesome woman” removed!  This was the first of his three known jail sentences for his preaching. The Bell Alley congregation was also known as the Church of Christ, London or The Coleman Street Church of Christ, being a few minutes walk north from St. Paul’s Church (Cathedral), depending on which history is researched.

There were also at this time two Thomas Lambs preaching for the church, the other was liberal who later became a member of the Church of England! Lamb was arrested and cast in jail, he was released on bail on 25 June, 1640 with the injunction "not to preach, baptise or frequent any conventicle" (unlawful church assembly). About October 15, of the same year, Lamb was in Gloucestershire preaching and baptising his converts. Here he was opposed by the Rev. Wynell. It was from this Church of England congregation in about 1639 that Richard Baxter became acquainted with the Lord’s Church.  As a result of the controversy Baxter was sent to London to learn from Lamb. Lamb came to the west country and baptized many converts in the River Severn. He brought with him Clement Writer, who was also a preacher. Wynell says Lamb held his services in a private house "and by preaching there he subverted many, and shortly afterwards in an extreme cold, and frosty time, in the night season, diverse men and women were rebaptized in the great River Severn, in the City of Gloucester." These baptisms were in the early winter of 1640. During 1645 after the publishing of an ‘ordinance of Parliament’ against un-ordained preachers the Lord-mayor sent his officers to arrest Lamb.  The congregation were furious that the authorities should break up their gathering on the Lord’s day, some used some very rough language, to which Lamb brought the affair to an amicable end by agreeing to appear before the Lord-mayor at six o-clock.  The officers accepted this, and Lamb and an assistant went to his lordship’s house at the appointed time.  Lamb argued they had broken no law for they were under the law of Christ.   This was rejected and they were handed over to a committee of Parliament, who after hearing them committed both men to jail.  At length, by the intercession of the brethren they were realised and found their liberty. Once when Lamb was out evangelising in Somerset, in the village of Oldford (Nr Frome), he baptised a lady in the river, which the church there frequently used for the purpose of baptising.   The husband of the lady, a man greatly opposed to the church took a “great stone”, concealing it under his coat, the purpose to do a great mischief to Thomas Lamb. As baptising believers was illegal, the husband stood little risk of prosecution, even if a serious injury was to result.   As Lamb stood with the lady in the river, praying, speaking and preparing to immerse her, the husband was so overtook with emotion, hearing the gospel, was baptised after her. Lamb was greatly opposed to the newly forming ‘Calvinistic Churches of Christ’ and their scheme of ‘particular’ redemption.  He was one of the few brethren who withstood this new apostate movement.  He wrote a pamphlet in 1642 in-titled  “A treatife of particular predeftination, wherein are anfwered, three letters, the firft, tending to difprove particular predeftination : the second, to shew the contradiction betwix Chrift’s dying for all, and God’s election of fome : the third, to prove, that the soul doth not come from the parent, and confequently  that there is no original fin. He set out and showed how that redemption is limited, though the offer of salvation is universal, thus he denied universalism and limited atonement.

He wrote a pamphlet, printed January 21, 1644 entitled “THE FOUNTAINE OF FREE GRACE OPENED” to oppose this new movement.

BY QUESTIONS AND ANSWERS Proving the Foundation of Faith to confift only in Gods
Free Love in giving Chrift to dye for the fins of all,
ad objections to the contrary Anfwered by the
Congregation of Chrift in London contifuted by Bapifme
upon the profeffion of Faith, falfy called Anabaptifts.

WHEREIN THEY VINDICATE THEM-Selves from the fcandalcus
afperfions of holding Free-will, and denying a free
Election by Grace.

This tract is opposed to the Arminians "who
notwithftanding they have found, to hold forth many
notorious errors, rafing the very Foundatios of
Christian Faith: to wit, denying Original Sin, holding
Free Will and Falling away"
(Above page 1)

Page 2 notes, “Thine in any fervice of love is our
prayer, The Church of Chrift in london falfly called
Anabaptists.”

Lamb brought to the attention of the brotherhood of encroachment Calvinism into the Lord’s church, in pamphlets in 1642 and 1644.  This happened after John Spilsbury and other were ejected from the Church of England.  Spilsbury and his compatriots were Calvinists and independents.  By about 1638 they had rejected infant baptism and were sprinkling believers.  When they came into contact with the Lord’s people they learnt of immersion as the correct mode (1641), and also the identity of the church, which they adopted by 1645.  By this date there were meeting in London seven congregations and one French congregation of this new Calvinistic persuasion. Thomas Lamb baptised Henry Denne (1643), who also wrote against this new innovation in the Lord’s church, in a leaflet; The drag-net of the kingdom of Heaven; or Christ’s drawing all men, 1646.   Despite these efforts through debate, leaflets and preaching, Calvinism was taken onboard by most the churches of Christ at this time.  These apostate churches of Christ with their Calvinism retained for a awhile the Biblical identity ‘church of Christ’ and baptised for the remission of sins.  They rejected for some time the idea a person could be saved outside of baptism. By the 1660s they slowly started to reject the biblical name calling themselves first “Baptised Churches” and later “Baptist Churches”.. Thus a new denomination was born, despite all the preaching and warnings.  Some churches rejected Calvinism, but became Quaker.  Others adopted universalism, others became members of the “General Baptists”.. A few, particularly in the North West of England retained the faith and at least one survived to join in fellowship with the American Churches of Christ in the 1840s.    Later in life Thomas Lamb was made a chaplain in the army of Oliver Cromwell, he died about 1672. About the year 1630, Thomas Lamb and his wife had a son who they named Isaac, he followed his father and assisted him in Cromwell’s army, soon after Issaac  was made chaplain of the ‘Conftant Warwick’, a British man-o-war at 16 years of age. He often preached before Admiral Blake, and on one occasion before both Admiral Pen and Blake. He baptised six of the ship’s men in the sea on various occasions.  The ship in which he sailed was part of the fleet that picked up king Charles 2 in the year 1660, he soon afterwards was stripped of his duty as ship’s chaplain.  He become a preacher at  Eastsmithfield (London) and often preached before three hundred people.  On one occasion he was told by the authorities to shop preaching, to which he replied “Whether it be right in the fight of God, to hearken unto you more than unto God, judge ye.”  At this short rebuff the authorities left without any more interruption. On another occasion seven Justices of the Peace, including Sir William Smith, Brown and Bury arrived in their coaches on the Lord’s day, accompanied with a posse of people.  They came prepared to break up the church fixtures, seating, pulpit etc.  Lamb having been previously warned of this had the items removed.. The posse was greatly disappointed, to which one of then justices exclaimed “his name ought to have been Fox, and not Lamb”. He died on August 20 1691, of which the historian Crosby notes he was “a man of fweet temper, exemplary converfasion, and great ufefulnefs”.

Back to contents page.