His history will be told later on this web site. John Tombes must be the only honest preacher ever in the Church of England, refusing to baptise infants, and causing great controversy.  The assembly of Divines were sitting in Henry the seventh’s chapel in Westminster, during 1640s, discussed further reformation of the Church of England. As a further reformation in the church had been proposed, the subject of baptism was discussed. "Mr. John Tombes (says Mr. Palmer) was among the first of the clergy of these times who endeavoured a reformation in the church by purging the worship of God of human inventions. He preached a sermon on the subject, which was afterwards printed by an order of the House of Commons." This exposed him to the rage of the church party; and at the beginning of the civil war in 1641, some of the King’s forces coming into Herfordshire, he was obliged to leave his habitation and the church at Leominster, and remove to Bristol. He soon afterwards fled from Bristol, and with great difficulty arrived in London, Sep. 22, 1643, from where he wrote his letter. He had lost his living with the Church of England but managed to find pulpits in which he could preach the truth.

The Church of England in this period had various parties vying for power, the Puritans who were mainly Calvinists and often Presbyterian (but not always as with Tombes). These were the true Protestants and then there was the Anglican pro-Catholic party. After 1658 the Puritans were evicted from the CoE, after which time the State Church was Anglican only and has remained so to this day. It has often been pointed out that in doctrine the CoE is Arminium, in theology, Calvinistic and in traditions and ceremonies, Catholic! It should also be pointed out that since the puritans, the pro-bible party were evicted, it is incorrect to refer to the Church of England as a protestant church, it is not, it is Anglican!

Salute one another with an holy kiss. The churches of Christ salute you.

"To the Christian Reader.

Many are the things at this day charged on Antipoaedobaptists in their Doctrine and Practise, which have been proved to be unjustly imputed to them, by many large Treatises extant in print. For a more facile understanding of the truth than by reading larger Tracts, is this Compendium, in a manner of a catechism composed and published in this time, wherein others of different judgment, have thought fit to declare their way to the world, which is done, not because the disagreement in other things is either small, or of particular persons (whose cause is to be severed from that which is commonly held) and therefore requires not a distinct Confession or Declaration from that which is by others published. Which I have thought necessary to be done because of the importance of restoring right baptism, the Doctrine of which is one article of the foundation of Christianity, Heb. 6.2. whereby we put on Christ, Gal. 3.27. united to his Members, Ephes. 4.5. conformed to Christ, Col. 2.12. Rom. 6.3,4,5. required with faith to salvation, Mark 16.16. with repentance to remission of sins, Acts 2.38. with express profession of the Baptized's faith required, Acts 8.37. upon manifestation of conversion, Acts 10.47. Acts 11.17. as the duty of the Baptized, and not a meer Priviledge, Acts 22.16. most solemly administered in the Primitive times, with strict examination and greatest engagement of persons baptized, accounted the chief evidence of Christianity, of as much or more moment than the Lords Supper; insomuch that some conceived from Heb. 6.4. that falling away after it irreparable. But the pretended Baptism of Infants, as now used slightly and profanely done, quite different from Christ's Institution and the Apostles practise by Ministers and people in so wholy and carnal manner as that, it is upon and with gross untruths and perverting of holy Scripture, obtruded on unwary souls with a pretence of a Baptismal Vow, which is a meer fiction, and so many ill consequents both in Christian conversation and communion and church-constitution and Government, that were men sensible to their evil as they should be, they would tremble at such mockery of God, and abuse of so holy an Ordinance of God's worship and men's souls by it, and with such arrogant presumption in avowing such a manifest invention of men as God's precept. And to speak truth, if the History of this corruption were fully cleared, it would be found that the undue Ministration of this Ordinance was the inlet to the Antichristian darkness and tyranny which overspread and oppressed the Christian Churches. The aim of the composer of it is the manifestation of the truth, wherein doth he rejoyce, and desires thou mayest rejoyce with him. His motion is that of the Apostle, Phil. 3.15,16. As many of us be perfect let us be thus minded, and if ye be otherwise minded, God shall reveal even this unto you. Nevertheless whereunto we have already attained, let us walk by the same rule, let us mind the same thing.

We learn from Thomas Crosby that in 1645, John Tombes, learned of problems that the churches in New England were having with infant baptism, he wrote to them a letter of encouragement enclosing further information.

A 'Mr Emlin' was a paid minister of one church of Christ at Boston and another church existed elsewhere that was baptising believers. An argument had developed with other churches over the matter of infant baptism and help was needed. Information to rebuff those baptising infants in other churches was sent to assist (Crosby, 1 120).

We can learn much from the letter. That churches that were established used the biblical identity, had elders and baptised believers. We may not agree with the introduction "reverend brethren", but Tombes had shortly left the Church of England, this being a time of learning and studying the scriptures.

2/ They used the identity - church of Christ

3/ They partook of the Supper weekly on the first day

4/ They had when possible. a plurality of elders and deacons

6/ They did not have separate priesthood

7/ They taught the triune Godhead

8/ They taught the church is the called out of God

10/ They taught the word only in establishing doctrine

11/ They taught Free Will, a dangerous doctrine in the early seventeenth century

The letter is reproduced from Crosby's 1738 volume one, pages 121 and 122, 'History of the English Baptists'. For Crosby the term 'baptist' simply meant a person who baptises by immersion a believer. It had in this time period no denomination connotations.

The letter is scanned from Crosby which we feel is preferable to producing a more modern translation in up to date English. 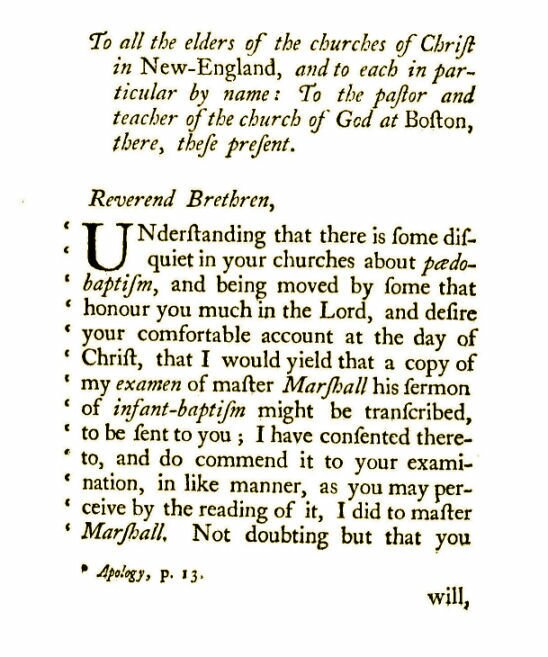 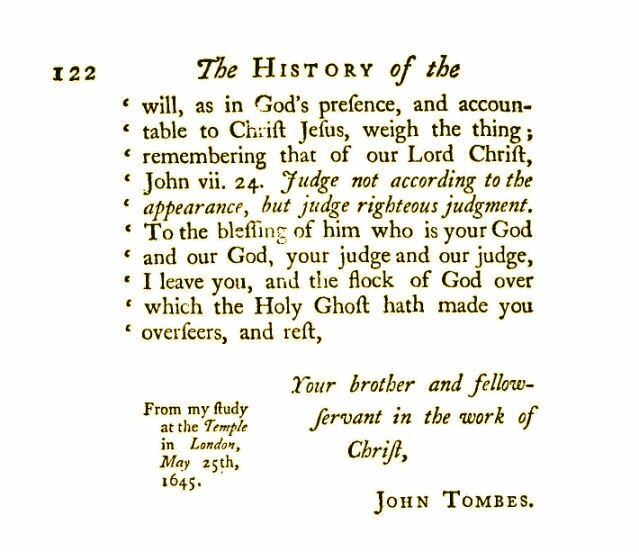 When evangelising amongst the natives, the Indians were surprised to learn that baptism (purification) of infants was not practised, that baptism was for adults only.  At least one congregation of the churches of Christ was established within the Indian community in the 1640s. In pagan societies the baptism of infants for removal of sins was universal, to learn more, click on the link below:

When the Mayflower arrived in America in 1620, from England, members of the Bell Alley and Southwark churches of Christ (London) were on board. The church in Southwark from which some of the Pilgrim Fathers, whilst in England had attended, was a church of Christ. The captain of the Mayflower, Christopher Jones was from Southward. Whilst the majority of the Pilgrim Fathers were not converted, they did know the truth of believers baptism and within a few years of arriving a church of Christ separate from other churches had been established in New England. (Skeat page 52, Wilson 4.122, Crosby 3.39ff). Regrettably these churches fell first into Calvinism, and later turned Baptist. But  in origin they were churches of Christ.

The Mayflower left from Plymouth, England which in 1620 had a small church of Christ. The congregation was associated with some of the Pilgrim Fathers during their stay at Plymouth. It must be understood that the majority of the passengers were Calvinistic and were opposed to the church of Christ.

John Tombes was involved with the Broadmead, Bristol church of Christ, founded in 1640, click below for the next page:

To go to the introductory page, click on the link below, if you came from elsewhere: