From 1644 eight churches of Christ in London (seven English and one French) became increasingly Calvinistic in outlook and later became known as the Particular Baptists.  They were the forerunners of todays Calvinist Baptists although the term Baptist was not being used in this time period, neither had the Baptist theology been developed. They had started by priests disaffected with the Church of England, who then came into contact with some churches of Christ in London, thus the Baptist denomination was begun!..  This was the first major spilt within the church, quickly followed when some others left and formed the 'Quakers'.

The Calvinsits produced Confessions of Faith in 1644 and 1646.  In January 1644 a response was made to the Calvinists by another group in a tract called;

THE FOUNTAINE OF FREE GRACE OPENED.

BY QUESTIONS AND ANSWERS

Proving the Foundation of Faith to confift only in Gods Free Love in giving Chrift to dye for the fins of all, ad objections to the contrary Anfwered by the Congregation of Chrift in London contifuted by Bapifme upon the profeffion of Faith, falfy called Anabaptifts.

WHEREIN THEY VINDICATE THEM-Selves from the fcandalcus afperfions of holding Free-will, and denying a free Election by Grace.

This tract is oposed to the Arminians "who notwithftanding they have found, to hold forth many notorious errors, rafing the very Foundatios of Christian Faith: to wit, denying Original Sin, holding Free Will and Falling away"

Thine in any fervice of love is our prayer, The Church of Chrift in london falfly called Anabaptists.

It is interesting for us to note that this group like the Calvinists were aware of a third group who were advocating both free will and falling away.  It is the third group to whom Tyndale and Henry Denne were members.

One of the founders of the Particular baptists Hansard Knollys trained David Crossley.   It was David Crossley who converted the Tottlebank church of Christ, Lancashire to Baptist theology becoming their Pastor in May 1695.

Title page from the 1646 Confession of Faith of seven (CALVINISTIC) churches of Christ. 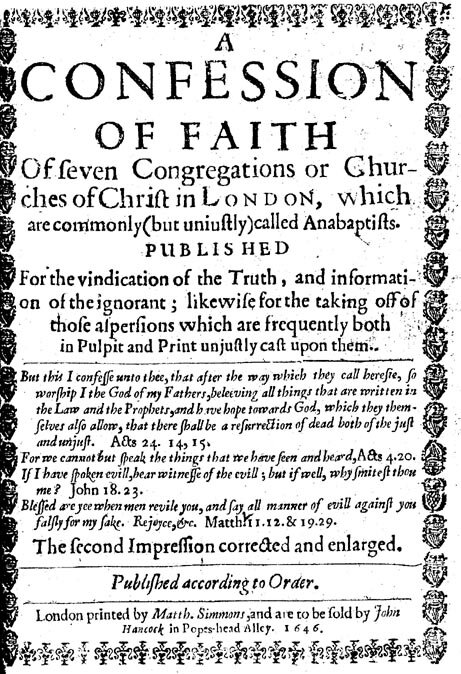 To know more about this important confession click here

Title Page from the 1645 Dippers dipt. 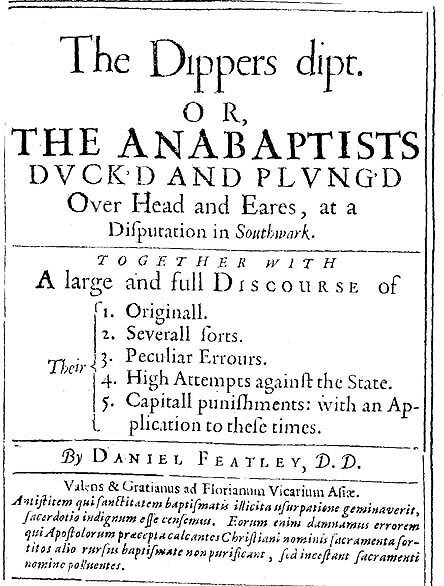 Note; that the Baptists are called Anabaptists and that there are several sorts.  Featley published this book in 1645 against many different Anabaptist groups.

From Daniel Featleys Dippers Dipt.   Again we see that according to Dr Featley there are Feverall Sorts of Anabaptists. 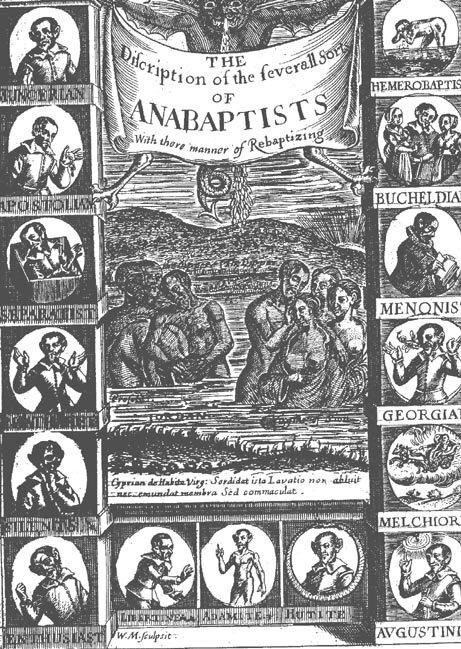