In the Furness Fells, in the North West of England, churches of Christ continue to this day, their heritage being both pre-Restoration in Great Britain and pre-Reformation, a heritage that lies in the Lollards and Waldensian Churches of the Middle Ages.

Jud 1:3 Beloved, when I gave all diligence to write unto you of the common salvation, it was needful for me to write unto you, and exhort you that ye should earnestly contend for the faith which was once delivered unto the saints.

Below is the site of a former chapel, where the church met up until 1652, when the Quaker, George Fox, converted the entire congregation, including the elders, to Quakerism. Ken Chumbley stands where Fox delivered his lessons. Over one thousand people listened, far too many for the chapel so they went into the field, Fox standing on the small hill overlooking the chapel. Many other churches of Christ would become Quaker over the next few years. Others would become Baptist.  All that remains of the chapel is the yard in which it stood, and a few graves. From the North of England the onslaught would be from the Quakers who moved south. From the South of England, the onslaught would be from the Calvinists, the forerunners of the Baptists who moved north. 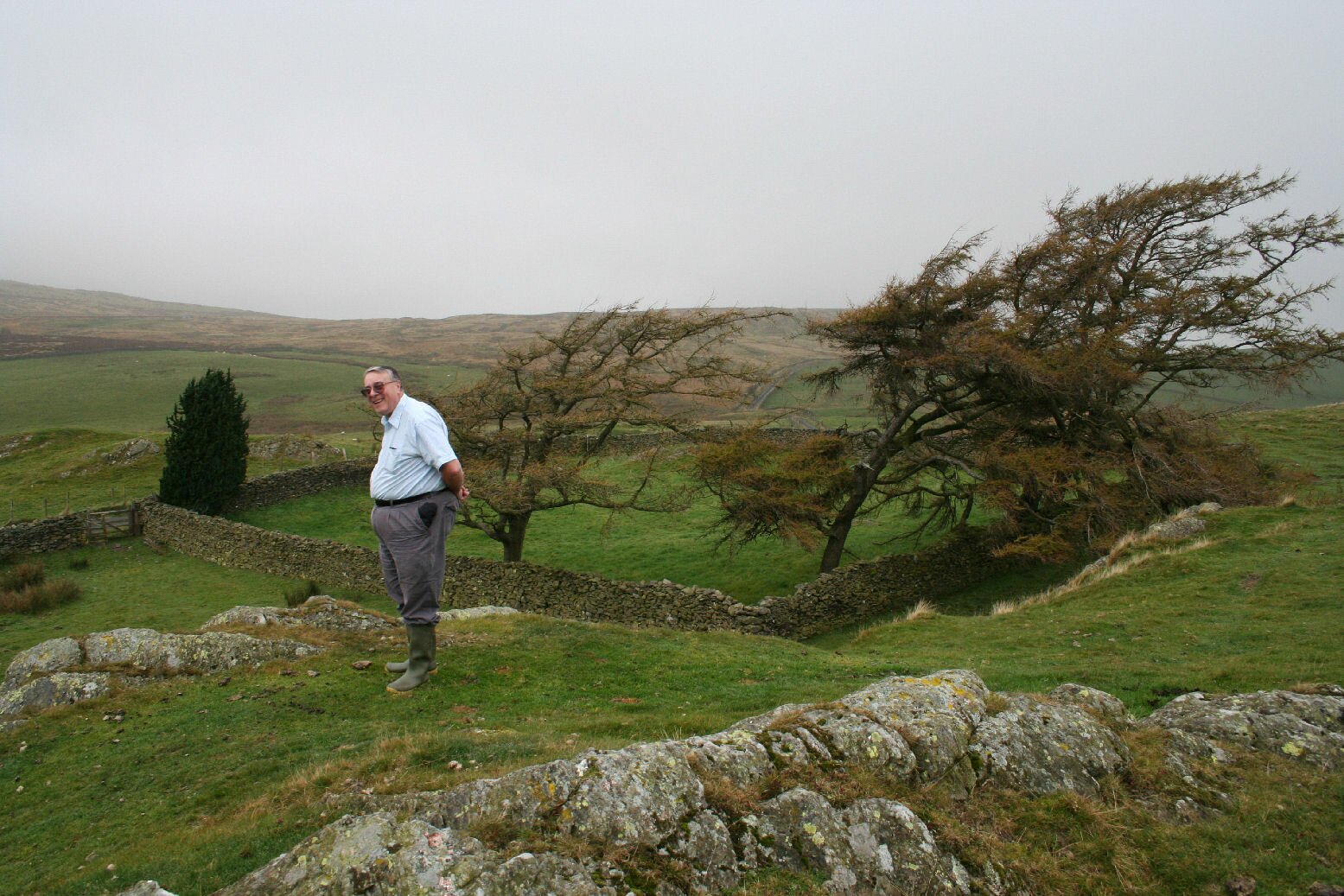 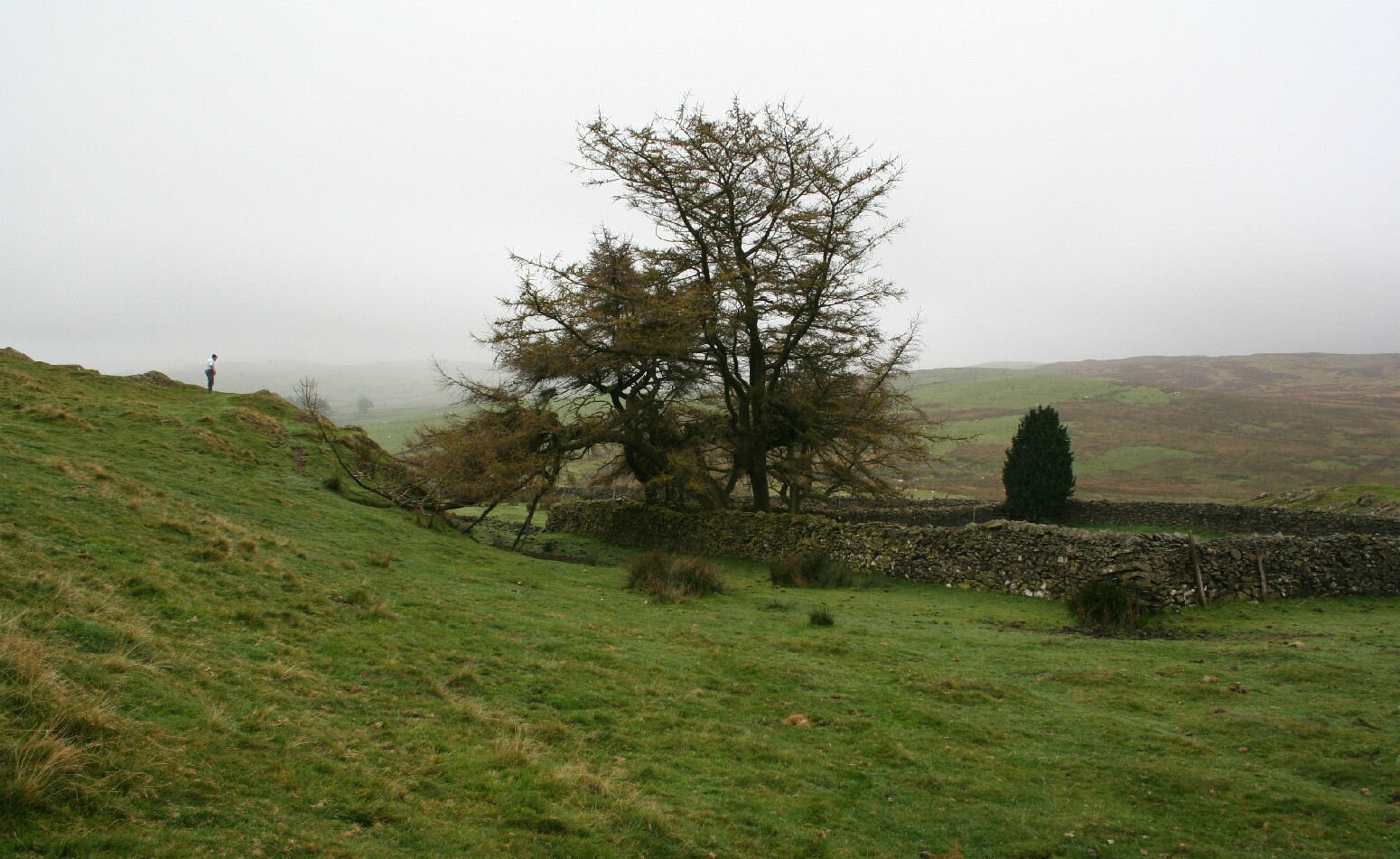 The Chapel was demolished in the nineteenth century, a later eighteen century head stone remains along with other grave stones. There is no evidence of the chapel, all the masonry having been removed. 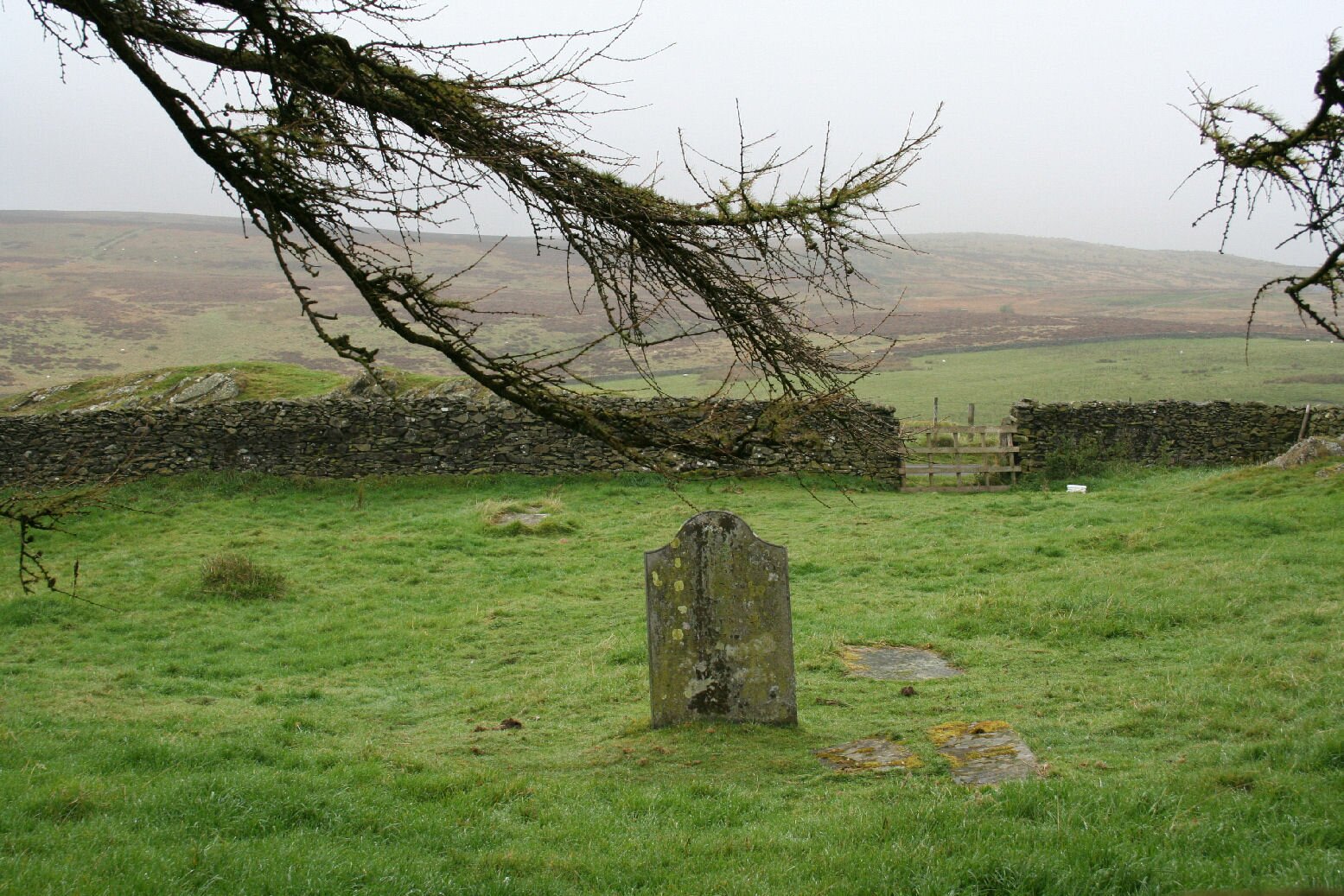 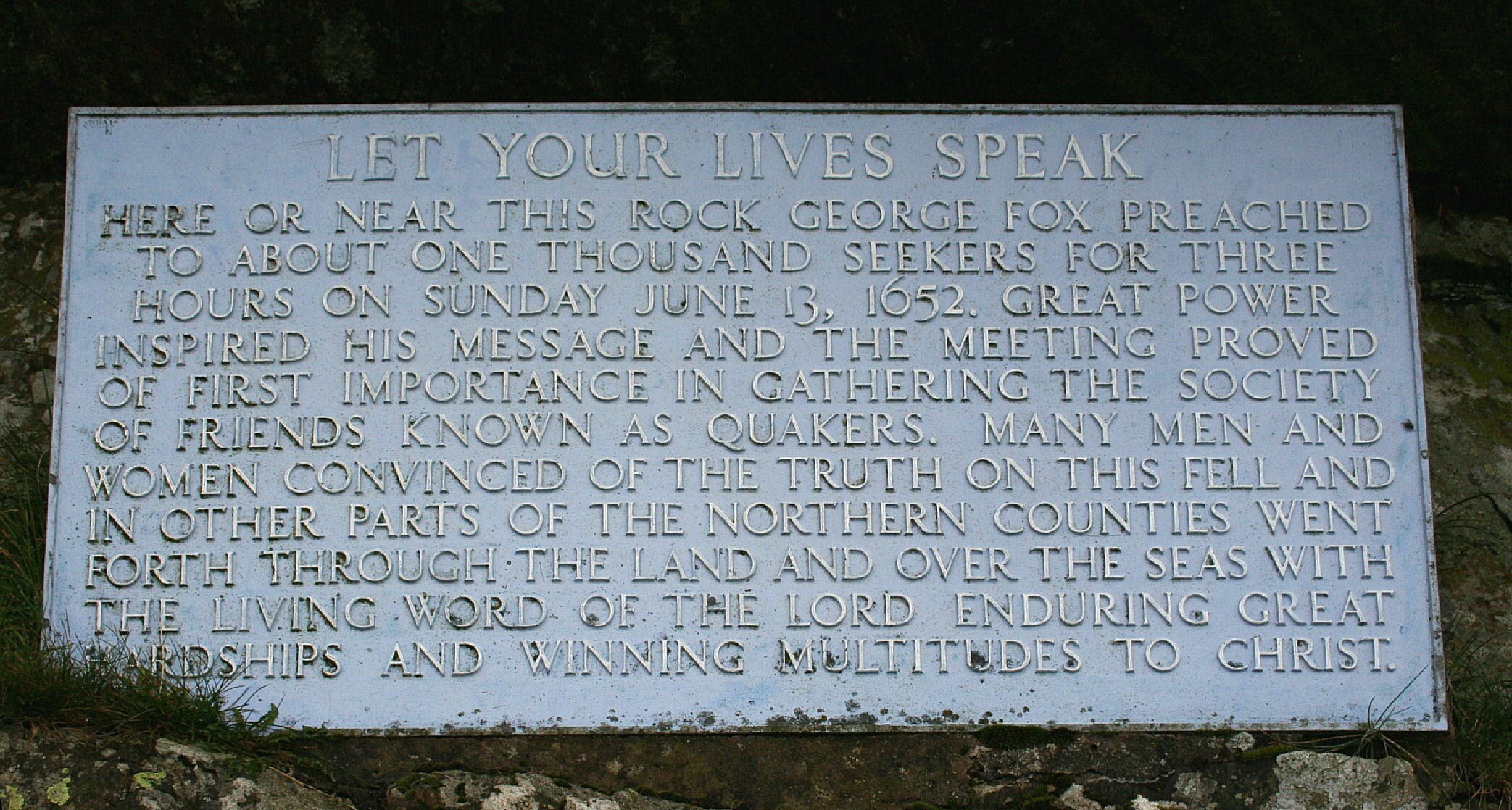 Below, known as Scroggs Meeting House, the church of Christ built this chapel in about 1703 at Whallenrigg in the Furness Fells. It is now used as a cattle shelter.

The Dalton-in-Furness Church of Christ first met in this former Pimitive Methodist chapel in the 1890s, having met in a hired room. They finished meeting in 1971, when they joined with the Congregationalists to form the United Reformed Church in Dalton. Today it is used by the Seventh Day Adventists. 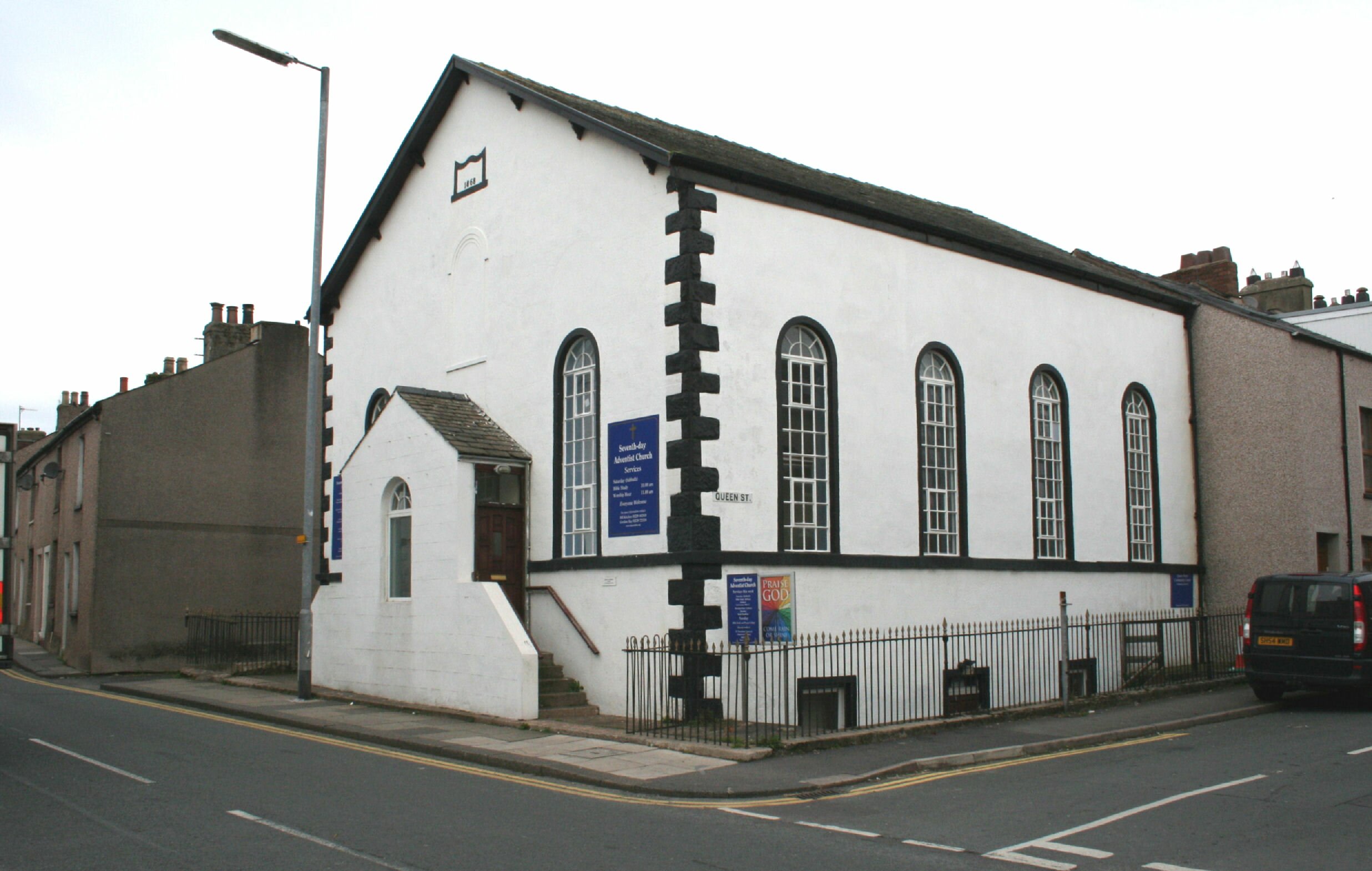 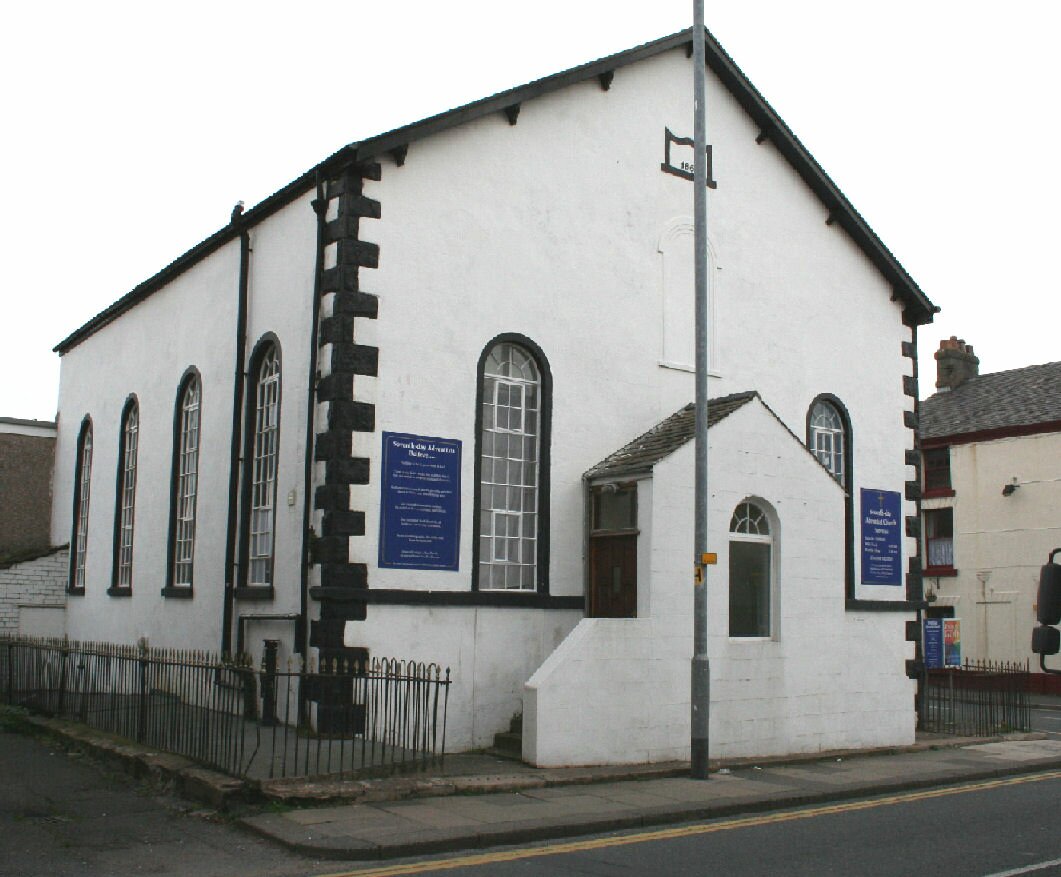 The building at Hawkshead Hill had originally belonged to William Dennyson, it was registered as a meeting house in 1709. William Wordsworth's 1809 description in The Scenery of the Lakes: "The building is mean and from the outside has so little to distinguish it as a place of worship that one might think that it had been constructed in an intolerant age for the purpose of avoiding notice".

The date on the building is 1678, but this refers to the church of Christ at Torver, the date for the building being 1709. 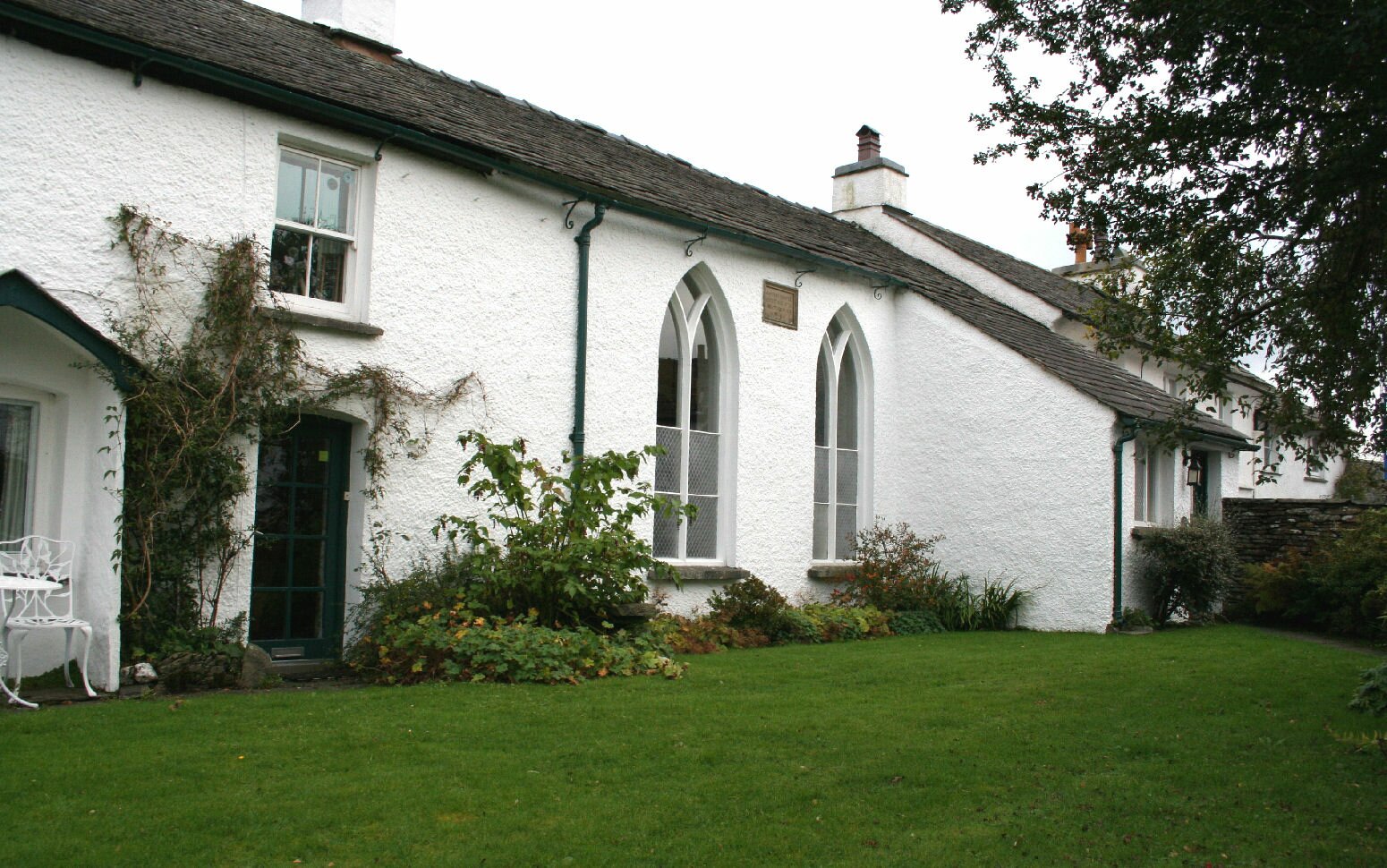 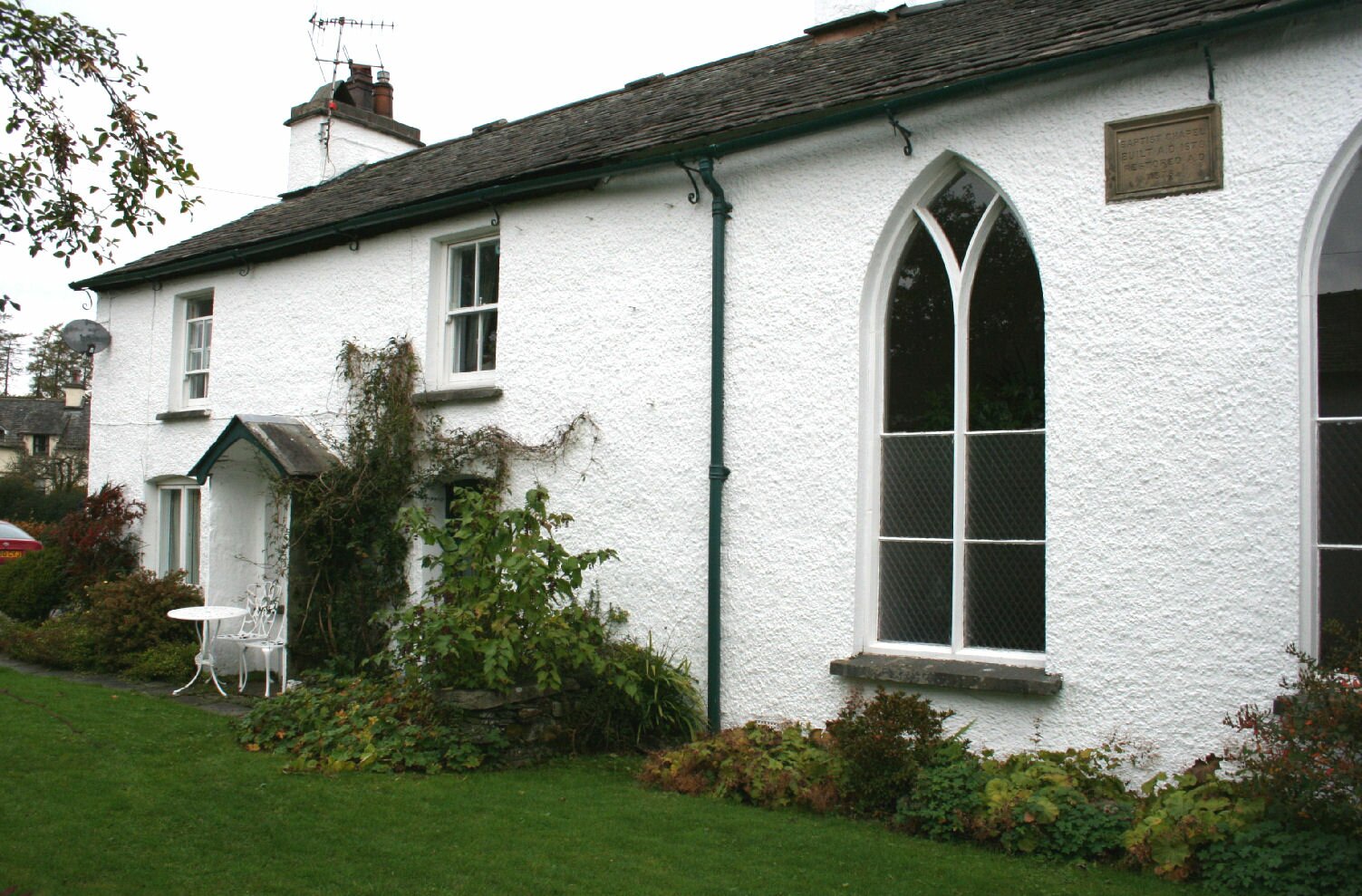 The ancient outdoor baptistery at Hawkshead. 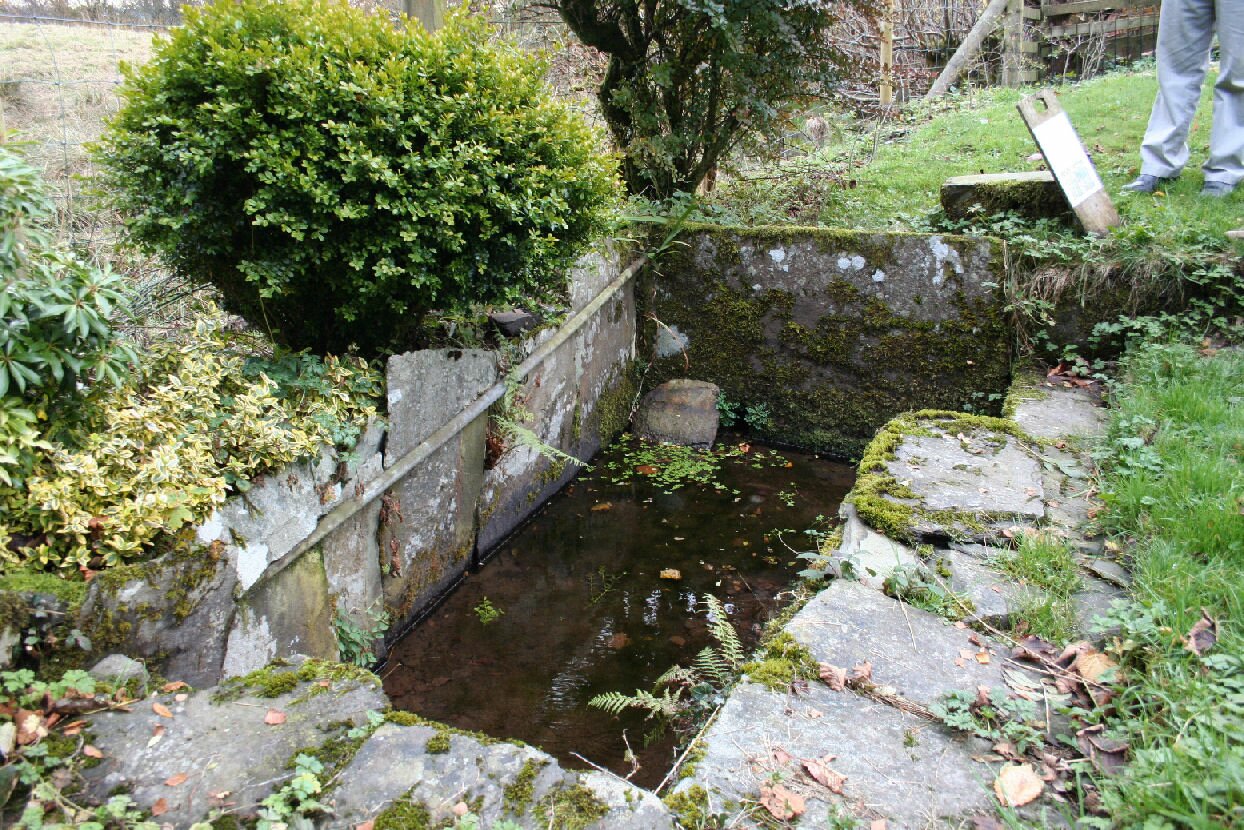 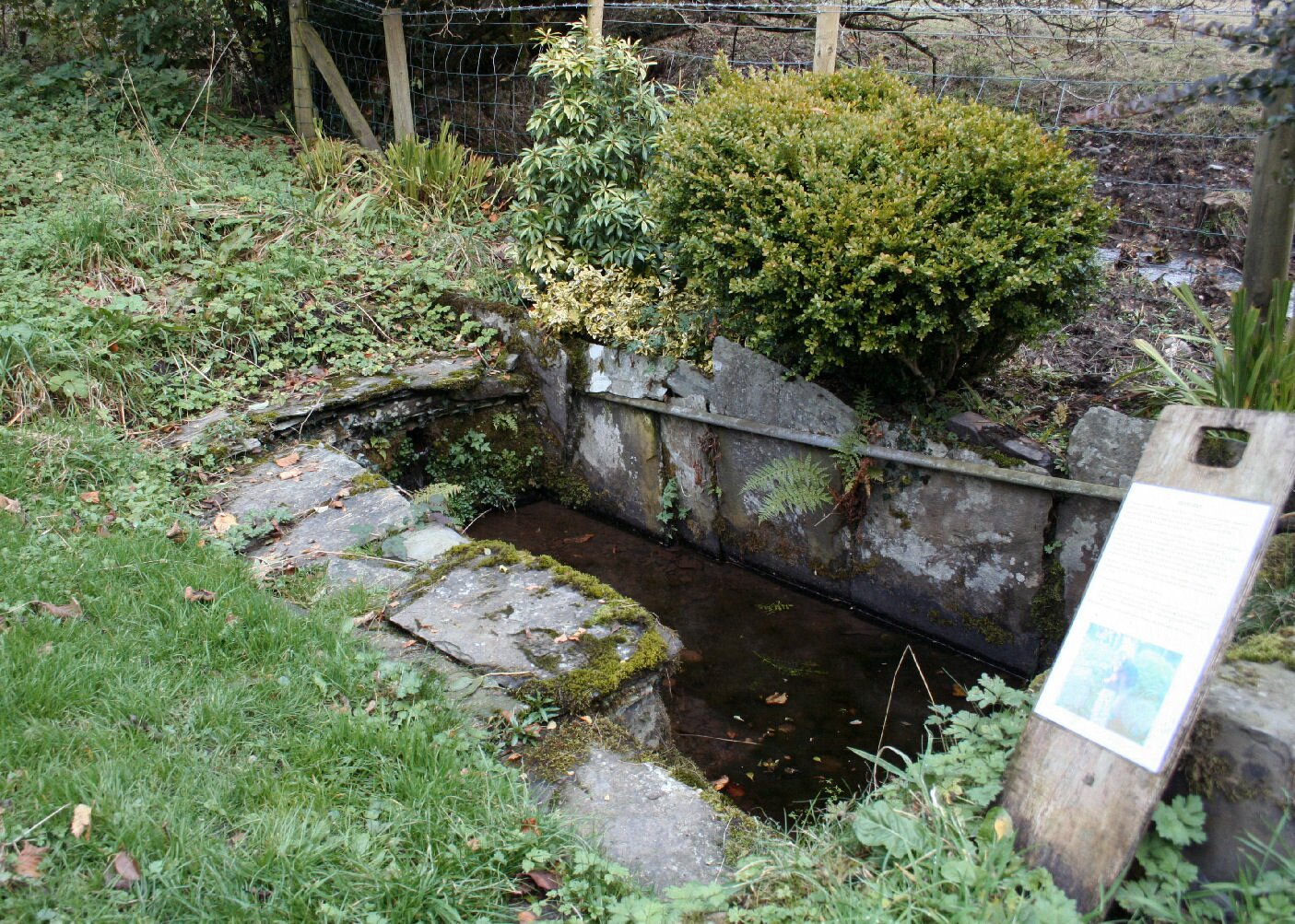 The Church of Christ meeting in Ramsden Street, Barrow-in-Furness.

The congregation was founded in 1864 by a group of Whitehaven fishermen who moved to Walney Island, which today is connected by a bridge to Barrow. Whitehaven is about 46 miles north of Barrow. Whitehaven had a Church of Christ established by the 1700s, whether these fishermen were part of that fellowship before moving to Walney Island is unknown. Later, they moved the congregation to the town centre. Membership was gained by Believers' Baptism and there was a service of Thanksgiving and Blessing for infants. In 1915 the present building was bought from the Railway Mission, this consisted of the meeting room and a small kitchen/boiler room and an outside toilet and coal shed. The building was modernised in 1972 with a small extension for a Community Room with kitchen and (in-door) toilets.

In 1981 the Church, along with the majority of the Churches of Christ, joined the United Reformed Church. There are now additional services of Infant Baptism and Confirmation.

As a church planting in the nineteenth century, the heritage of the Barrow (Ramsden St) Church of Christ is not with the British or American Restoration Movements but of those Churches of Christ in the Furness Fells of England dating back to the 1600s, who had a much earlier origin. 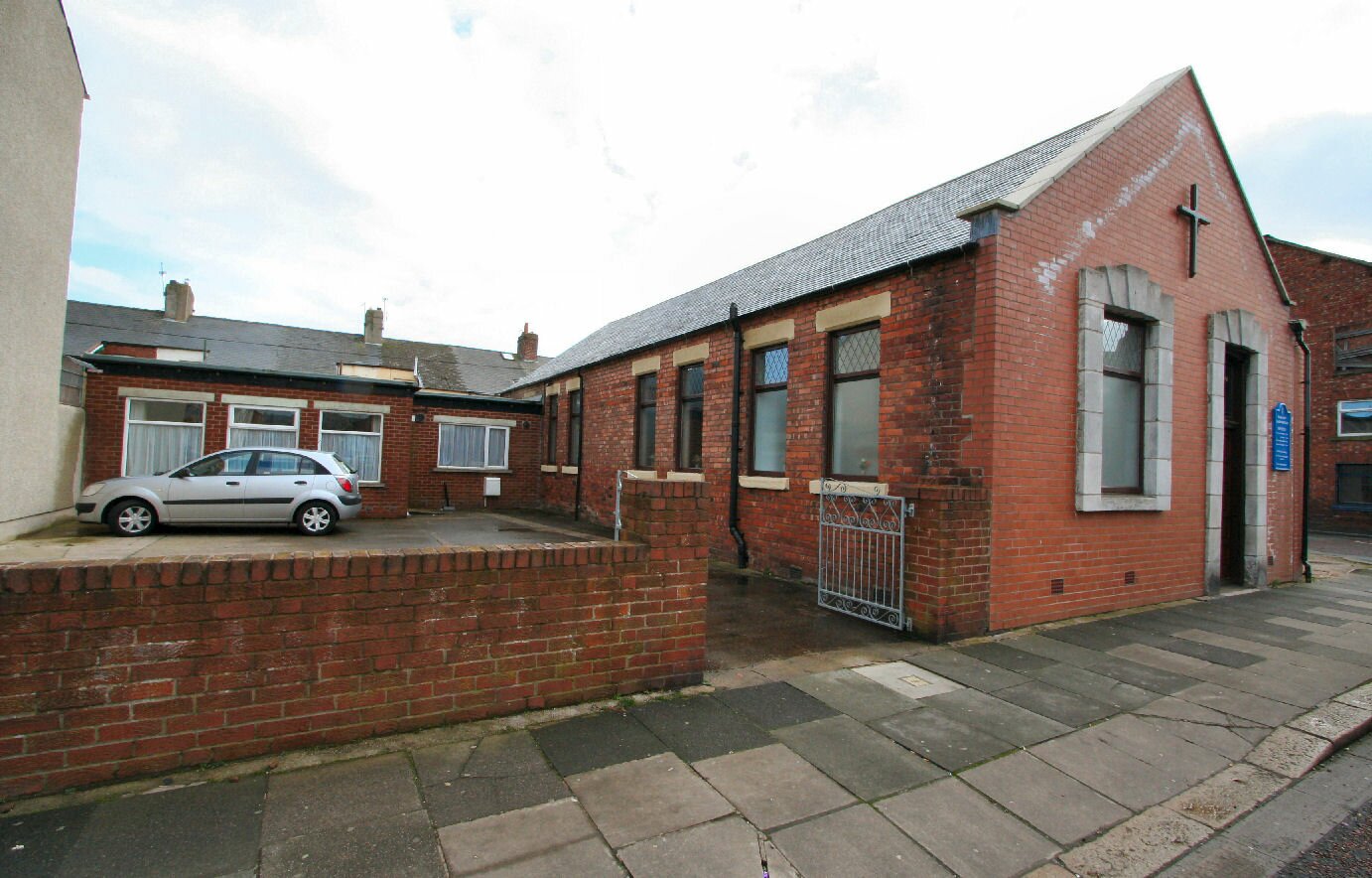 The Askham-in-Furness Church of Christ built this chapel in about 1907, at a cost of £350. The congregation ceased meeting in 1956, when the building became St. Anthony's Catholic Church. 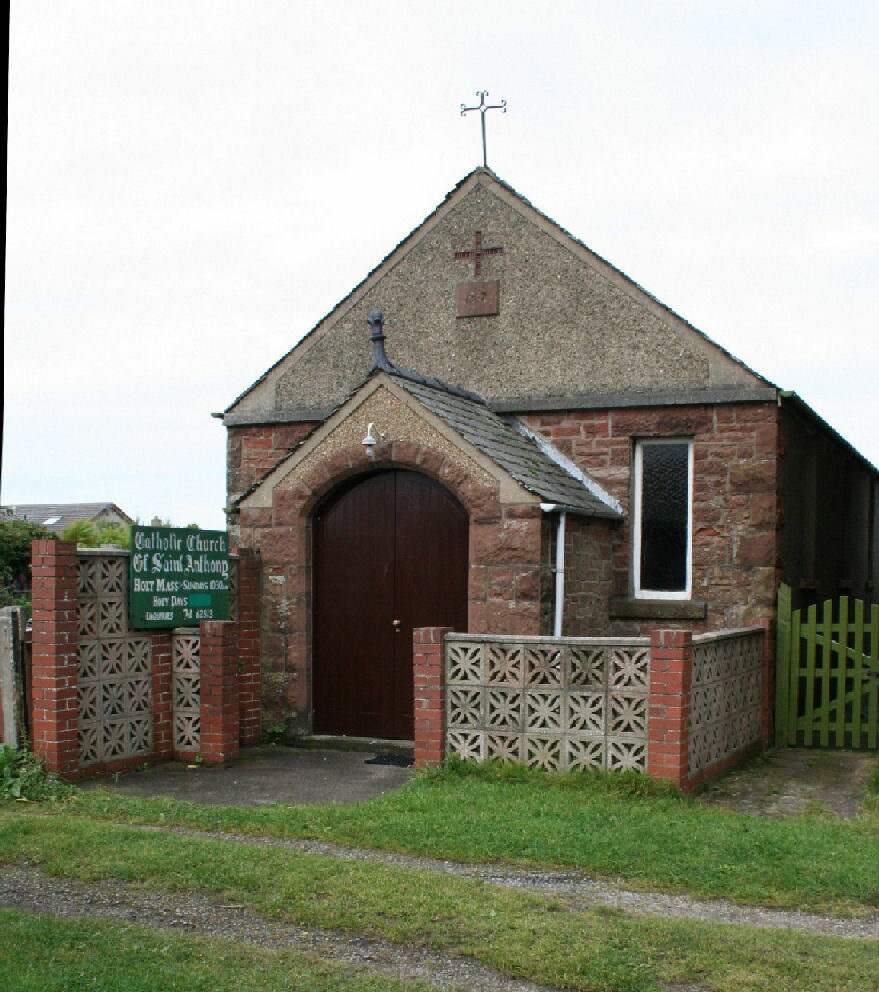 The Tarn Close Church of Christ, Great Urswick, meeting house built in about 1920, it is now a United Reform Church. 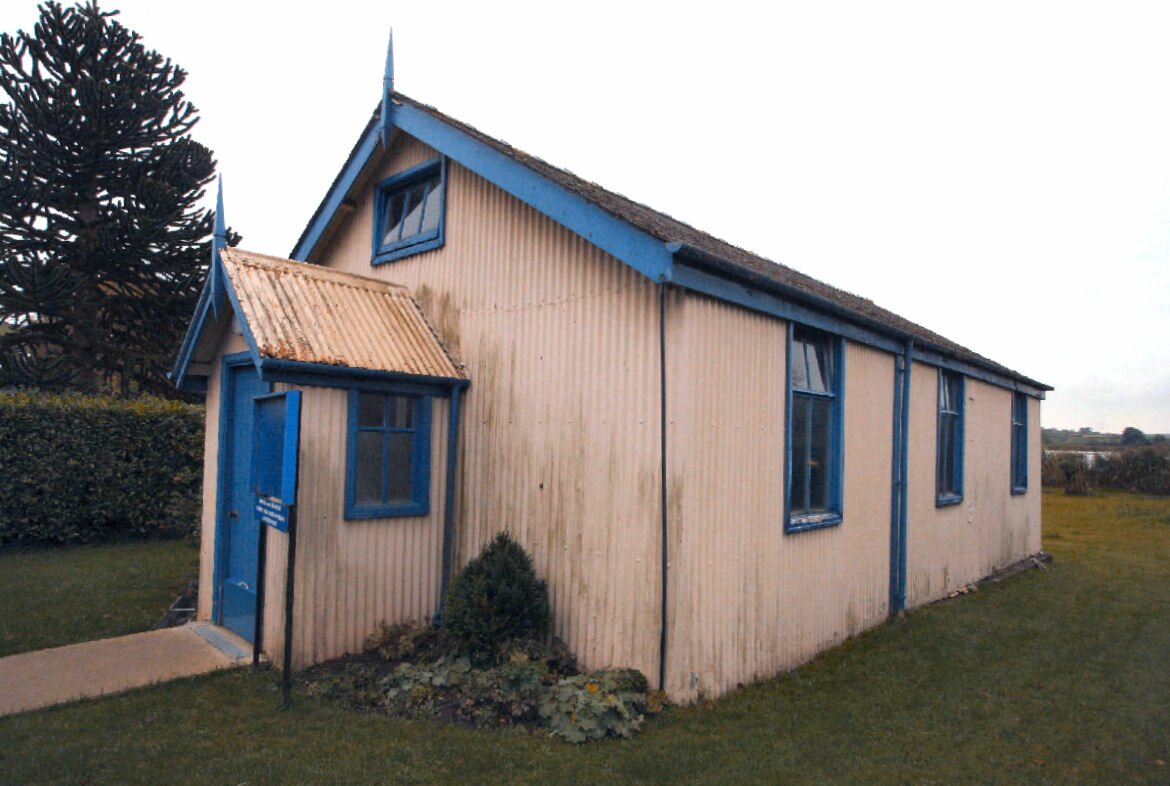 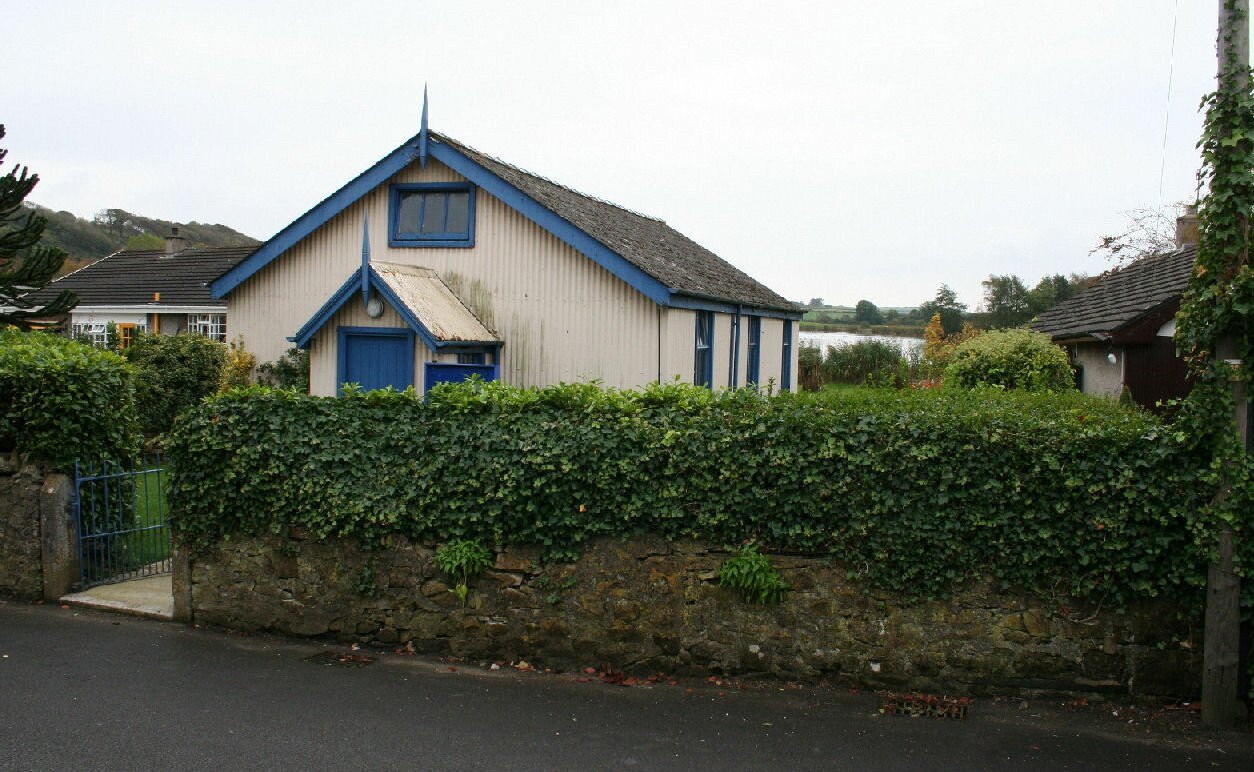 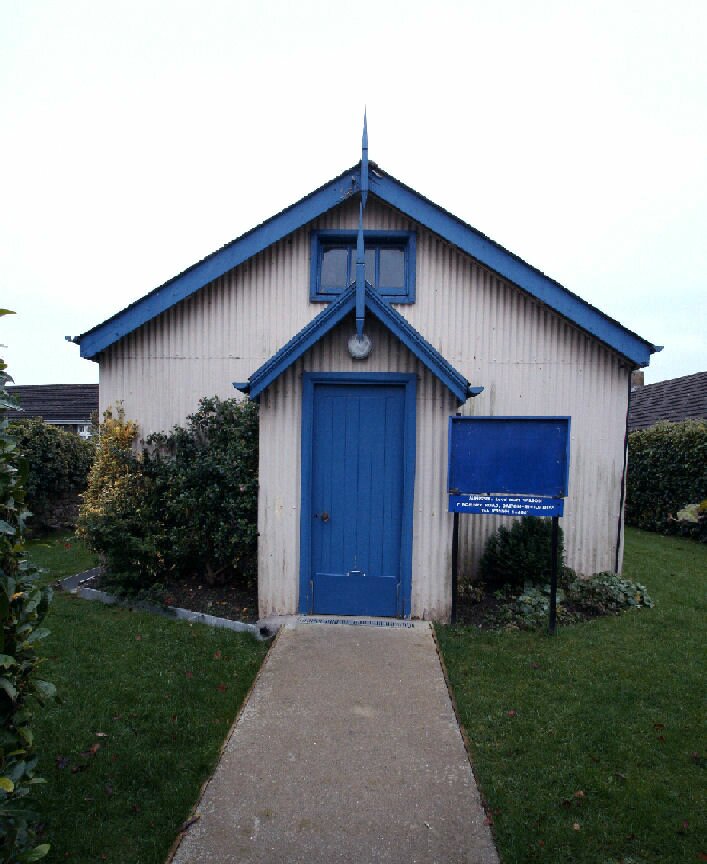 The Workington Church of Christ, to the north of the Furness Fells, the meeting house is now a house.

The Lindale-in-Furness Church of Christ, the meeting house was built in about 1875, it closed after 1945, now being a private house. During a campaign in 1875, a debate was held between the “Rev” L. O. Lewis, Vicar of Lindale-in-Furness, and Mr David King of Birmingham, held on the 8th, 9th 14th and 15th of December 1875. This was during an outreach campaign organised by the brethren at Kirkby in Furness.  Joseph Crosthwaite, at that time a Baptist, became convinced of the truth and in his words "causing me to see clearly that I was not on New Testament ground in many things, therefore I was forced to move." Bro. Crosthwaite continues, "on the 12th day of March, 1876, I had a conversation with two friends of mine who had been formerly connected with the Baptists. They said they would like to meet according to the teaching of the New Testament. I invited them to go with me to Lindale, and they would see our form; and also hear bro. Evans give his finishing discourse on 'The Tabernacle.' They did so and were delighted. Bro. Evans advised us to meet at once, he believing us to be men of stability. Therefore we met for the first time in Ulverston to ‘break bread’ in the house of sister Sarah Woods on the 19th day of March, 1876. There were present four brethren and three sisters… The Church continued to exist amidst many trials from false and unfaithful brethren up to March 20th, 1881, when it was decided that after March 27th we meet with the brethren at Lindale, about three miles off. We continued there up to April 1st, 1883, upon which day we met again in Ulverston, and hope we will never have to give up till the Master comes to call his people to Himself." 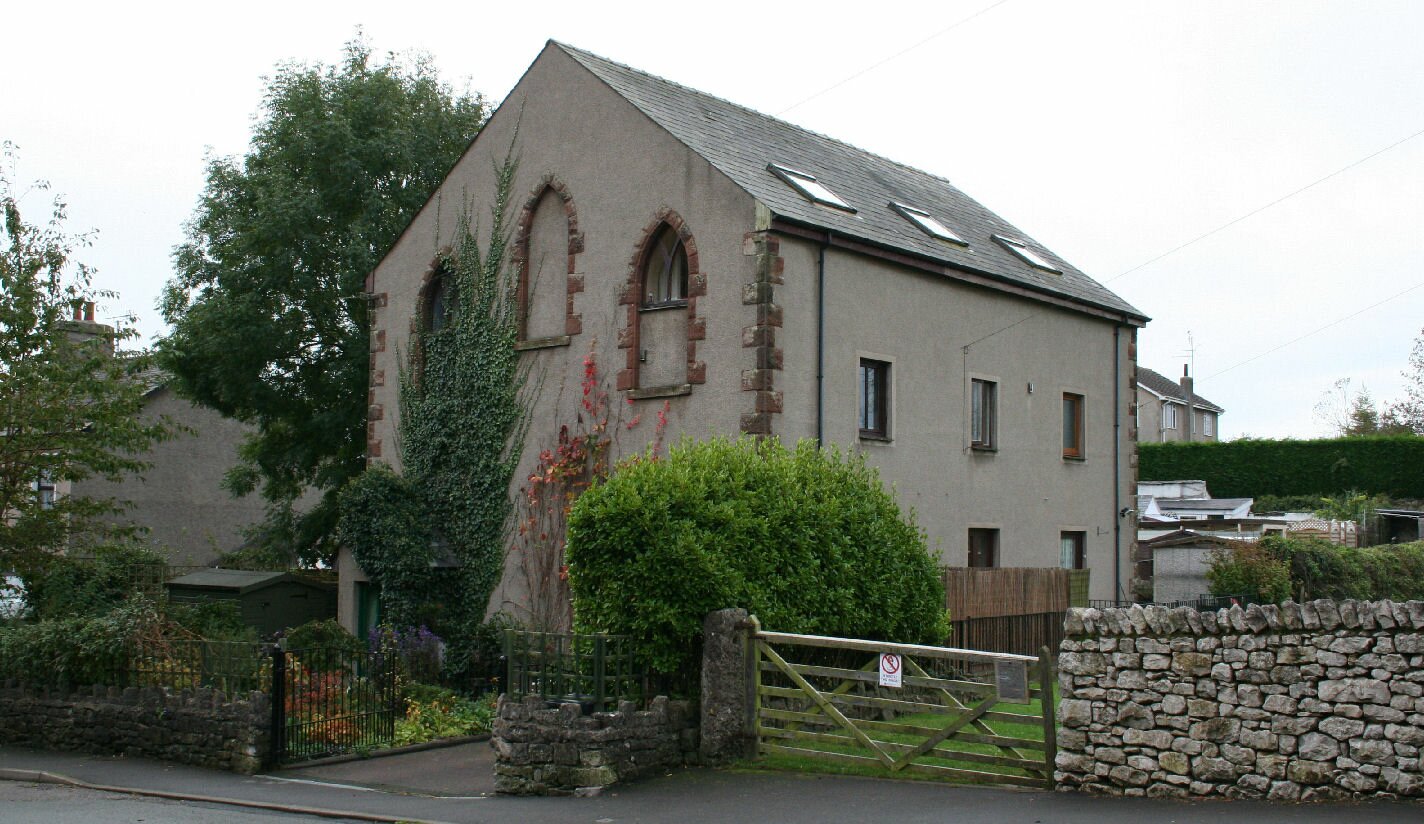 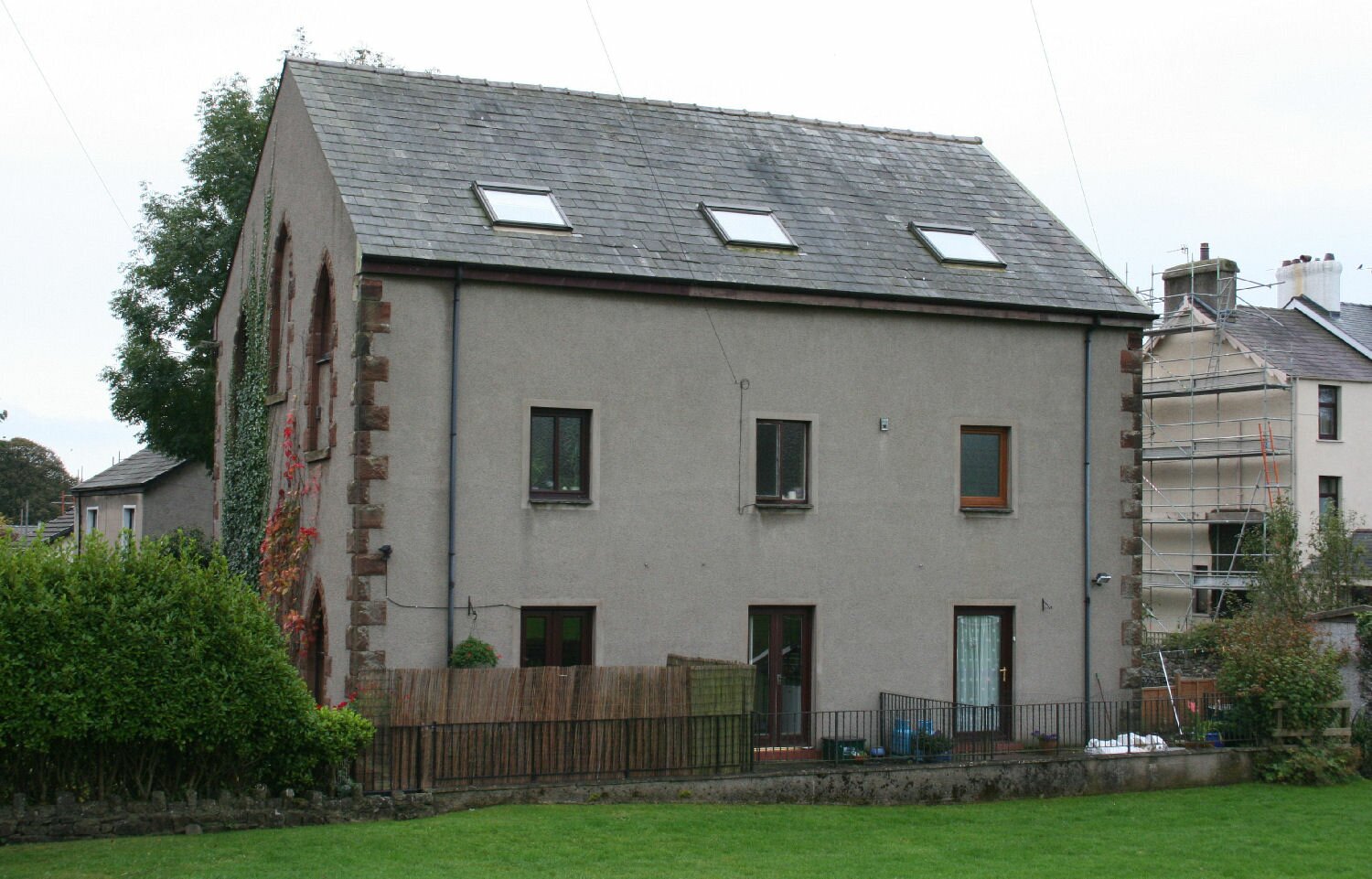 Below, the Meeting House of the Church of Christ in the Ellers, Ulverston, which was demolished many years ago. It is to the left of the Coal Merchant. The building was acquired after 1883. It was here that Joseph Crosthwaite was one of the elders. In 1891 his son, Walter Crosthwaite, was baptised. The late American brother, John Allen Hudson, said of brother Walter Crosthwaite in his book 'The Churches of Christ in Great Britain (1948)', to have "saved the cause of our Lord from complete defeat in Britain." It was from Walter Crosthwaite that the work of training evangelists to prepare the church for the later part of the twentieth century was undertaken. Brother Crosthwaite was born in Ulverston on October 30th, 1873.

The fellowship to which Joseph Crosthwaite belonged was the churches of Christ which are known to have existed in the Furness Fells of Northern England in the 1600s, and those churches were in fellowship with other Churches of Christ, which went back many years earlier. Dr Robert Halley, Principle of New College, London (congregational) wrote in 1869 in his work 'A History of Puritanism and Nonconformity in Lancashire' of the Tottlebank Church of Christ, "It has been disputed where was formed the first congregational church in England. Islington, Yarmouth, Southwark, Dukinfield have claimed the honour. Among the fells of  Furness was founded the first Christian church in England. By Christian I mean here not congregational, not Presbyterian, not Episcopal, not Baptist, but simply Christian in its unrestricted sense - Christian not sectarian, Catholic not denominational, a church of people acknowledged as Christians and nothing else. A poor ejected Minister from over the sands had the wisdom and grace to form a such a church, and the poor mountaineers of his neighbourhood had the piety firmly to adhere to it and long sustain it." Dr Halley was wrong, such churches in the Furness Fells pre-existed the Tottlebank congregation and the heritage of these congregations led in time to the work in Ulverston.

The picture below is of the meeting house in the Ellers, Ulverston. In the picture on the left is brother Joe Rockliff, the other brother is unknown, but it has been suggested he may be either Joseph or Walter Crosthwaite. Walter died on May 23, 1961. Clearly the brother in the picture is too old to be Walter, therefore if it is one of the Crosthwaites, it is Joseph. 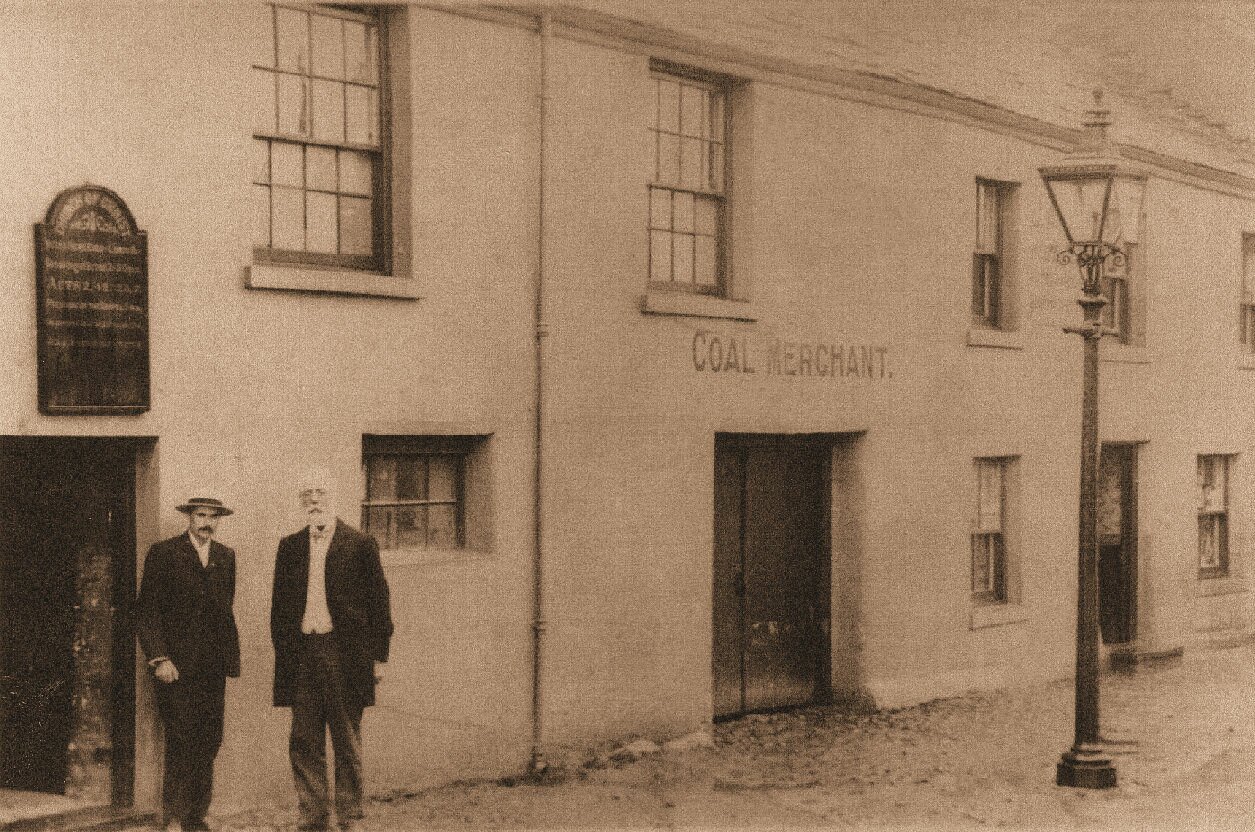 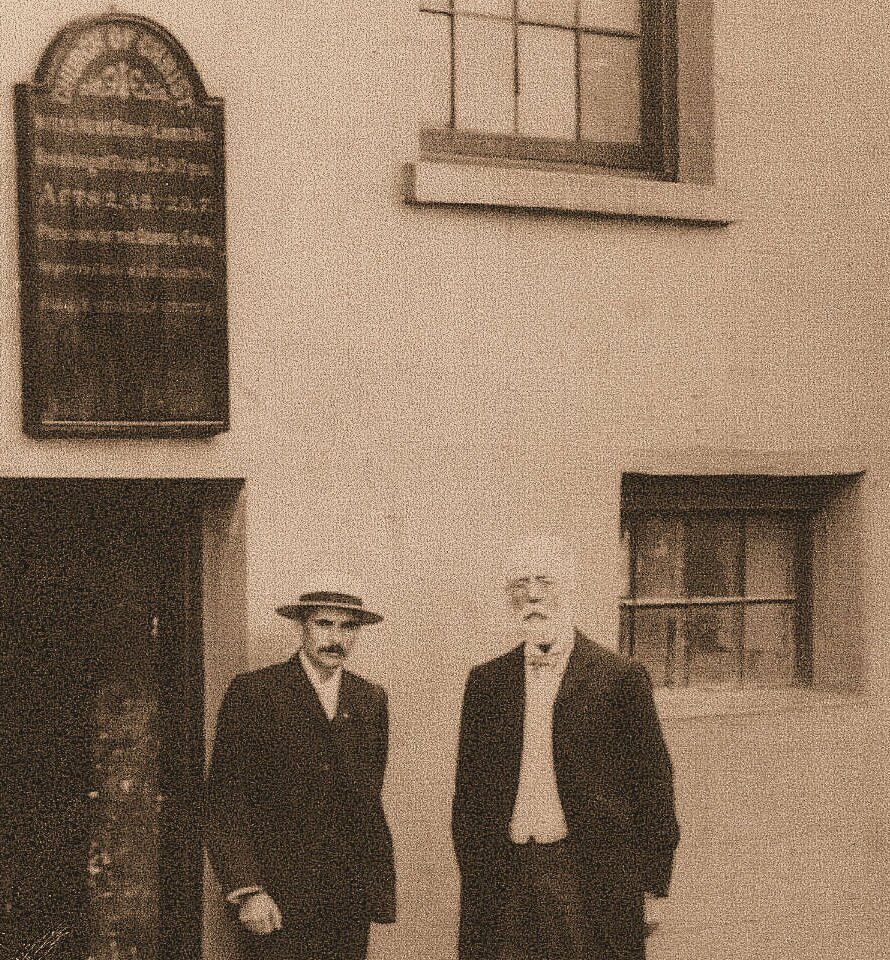 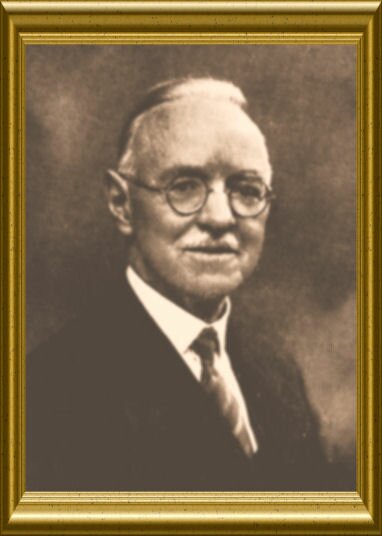 Later the Ulverston congregation moved to Union Street in (about) 1925, the congregation ceased to meet there in about 1984. The congregation became instrumental, having divided for that and other reasons in the late 1920s. After 1984 the church having sold the building became an Assembly of God congregation, being about twelve in number. 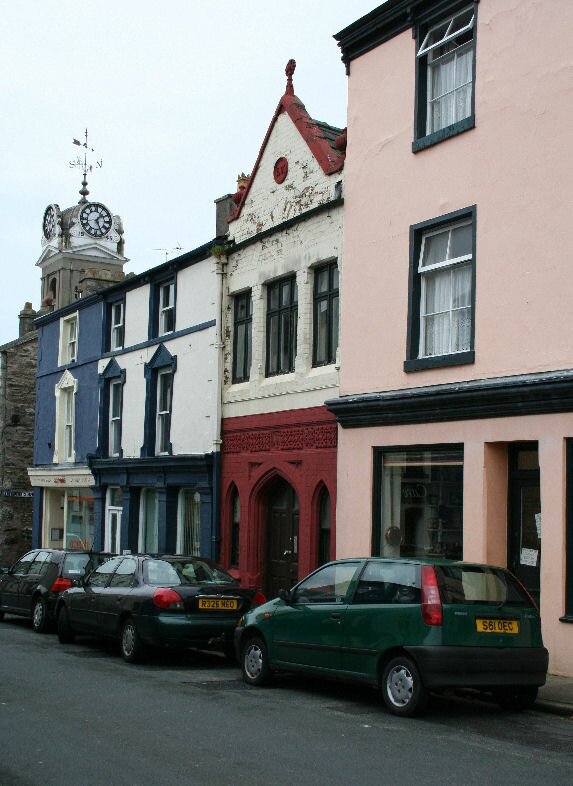 Below, the Ulverston Church of Christ, which remains acapella. Their meeting house was converted from stables after 1977, they still continue to meet having broken away from the Union Street congregation in the late 1920s. Opposite the meeting house is the Emmanuel Christian Centre, where the Assembly of God in Ulverston meet, being acquired from June 1986 by the Assembly of God. 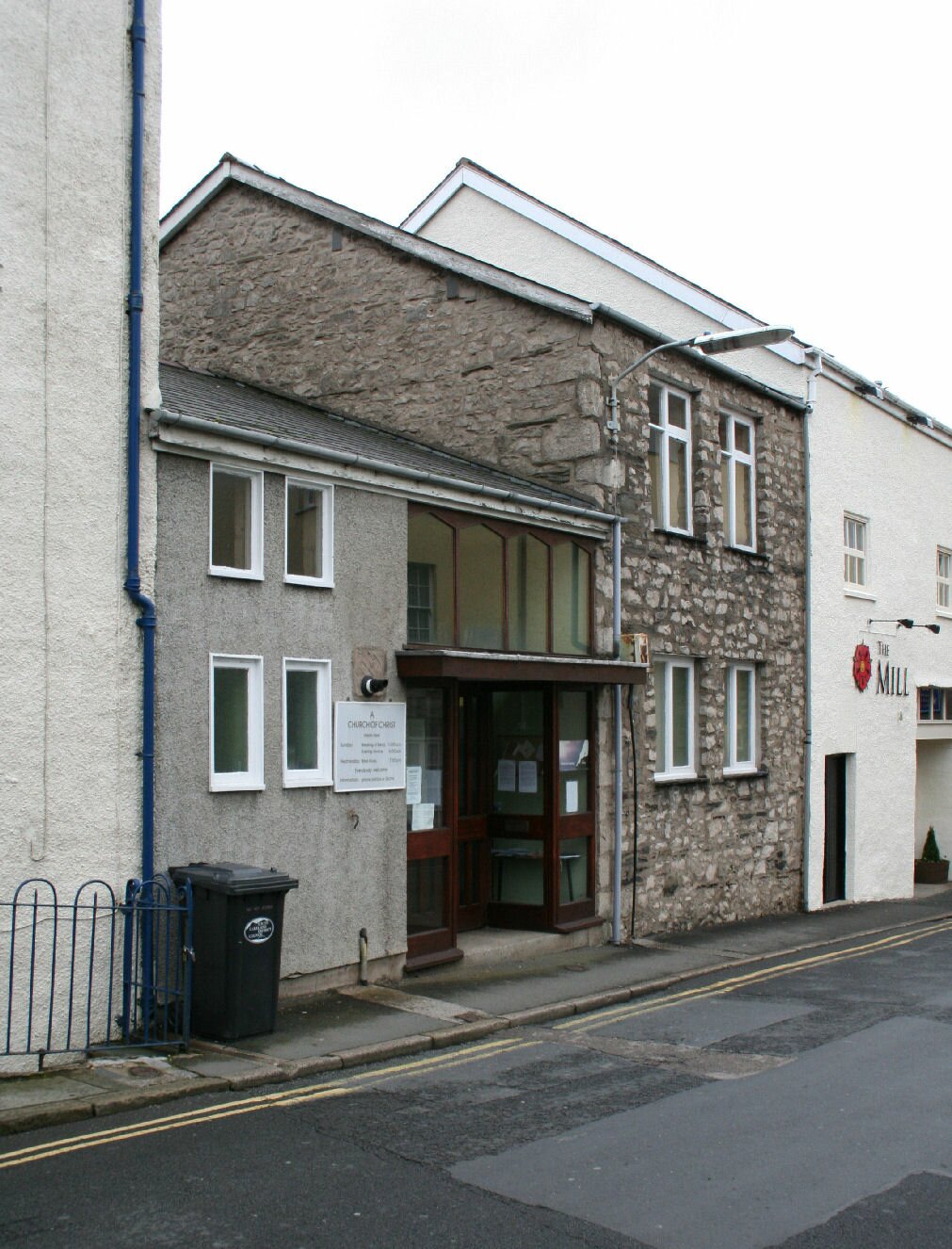 The Interior and baptismal pool. 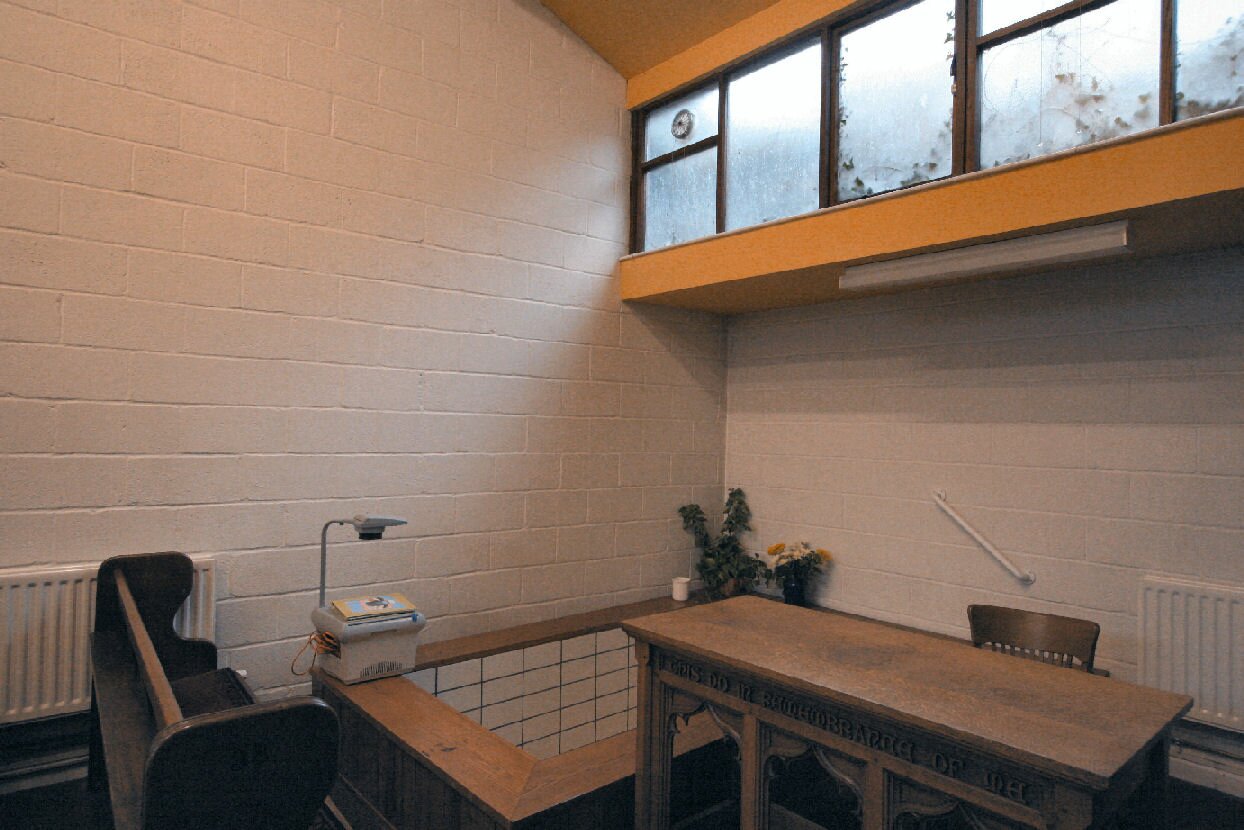 The meeting houses and congregations of the churches of Christ in the Furness Fells, shown on this and previous pages, are not founded in the British or American Restoration Movement, their heritage predating the RM by centuries.