y church of Christ, England - Traces of the Kingdom 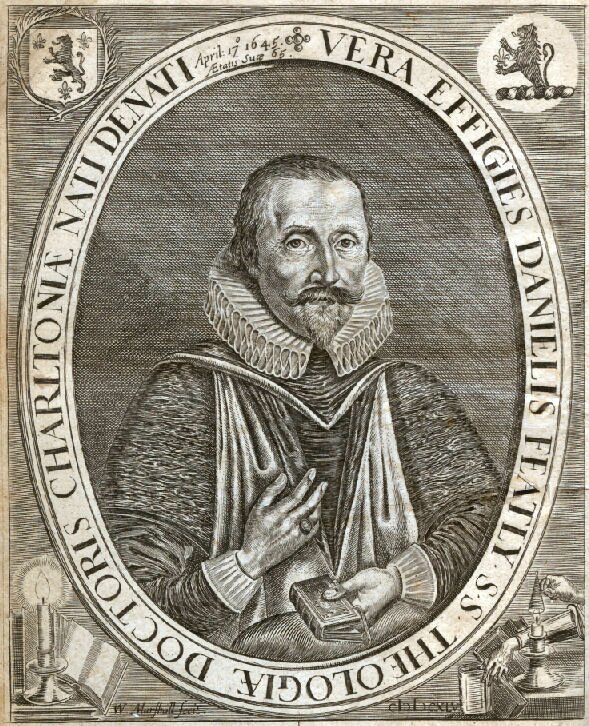 Portrait above taken from the fourth, 1646, edition of the Dippers dipt.

2Pe 2:1 But there were false prophets also among the people, even as there shall be false teachers among you, who privily shall bring in damnable heresies, even denying the Lord that bought them, and bring upon themselves swift destruction.

Dr Daniel Featley (also known as Richard or Daniel Fairclough, other spelling includes Danielis Featlei), he  was an adversary of the Lord’s Church during the early to mid 1600s, writing against them. He was an Anglican theologian of some considerable renown. He was born 1578 in Charlton, Oxfordshire — he died April 17, 1645 in Chelsea, London.

From Featley, a witness to existence of the church in the early seventeenth century is from whom we learn of some of their beliefs. He wrote about the church before and during the time some apostasied into Calvinism and later becoming the forerunners of the many Baptist denominations.

Featley was a scholar of Corpus Christi College, Oxford, and probationer fellow in 1602, after which he went to the court of Henry IV of France as chaplain to the English ambassador.

Featley was involved in the translation of the 1611 King James Version of the Bible. He served on the "First Oxford Company", responsible for the later books of the Old Testament, beginning of Isaiah to the end of the OT). Featley is listed under the pseudonym “Daniel Fairclough” in the list of translators, he was aged 26 being the youngest by far, which may explain why he hid his identity.

For some years Featley was co-chaplain with Thomas Goad to George Abbot, Archbishop of Canterbury, and held also the London rectories of Lambeth (1619), Allhallows, Bread Street (c. 1622), and Acton (1627), this last after leaving the archbishop's service in 1625.

Featley was also a chaplain in ordinary to Charles I of England, and was appointed provost of Chelsea College in 1630. In 1641 he sat on a subcommittee to settle religion. In the course of this work he had a disputation with four members of the Church of Christ on October 17, 1642 who he called “anabaptists” at Southwark (South London), which he commemorated in his book The Dippers dipt or the Anabaplists dunckt and plunged over head and ears (1645). At the time of the "disputation" in 1642 the majority of the churches of Christ were not Calvinist. The Baptist Church denomination and calling men Baptists had not started. Therefore Featley antagonistic to the Lord's Church offers a wonderful glimpse of the church in the 1600s before the apostasy set in that lead to the various Baptist denominations.

One of his adversaries he names as Cuffin, who was probably William Kiffin who two years later was preaching at the church in Devonshire Square, where he served until his death in 1701. Kiffin was a wealthy London merchant with great standing in the community and with king Charles II. The king appointed him to public office as an alderman of London, a Lord Lieutenant and a magistrate though he seldom exercised these offices. Kiffin became in time associated with the churches who became Calvinistic. Kiffin was baptised in about 1639, three years before the disputation. The names of the other three are not mentioned. After the restoration on the monarchy in 1658, Kiffin found himself in prison several times for brief periods before becoming a friend of Charles 11. For instance, in 1664 he was able to rescue twelve members of the church (non-Calvinistic), who had been sentenced to death for participating in an illegal conventicle (church).

Kiffin was one of the prime agents for spreading Calvinism into the churches of Christ in the later part of the seventeenth century. He and others had a nationwide strategy, these congregations so converted later wore the identity - Baptist, and their members - Baptists. When Kiffin was baptised the church was opposed to Calvinism, wore the identity - Church of Christ and its members - Christians. 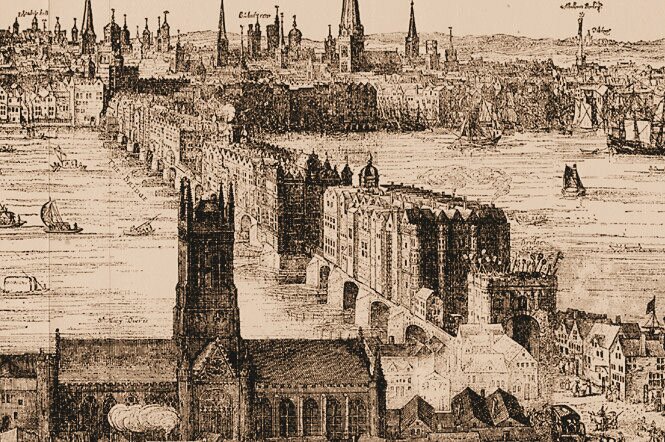 Above, Southwark Cathedral with London Bridge, in the background behind the bridge is where the Bell Alley (Coleman Street), Newgate and Bow Lane congregations met. Picture by the Dutch artist, Claes Van Vissche, engraved in 1611. It was here that the disputation at Southwark took place.

Featley sat in the Westminster Assembly of 1643 and was the last of the Episcopal (Anglican) members to remain. For revealing its proceedings to Archbishop Usher, who was with the King (Charles 1). For this he was expelled and imprisoned in 1643. Even whilst in prison Parliament, now under control of the Calvinists (Puritans) could find no adequate defender of the faith amongst their own ranks and begged the imprisoned Featley to help them in their anti-papist campaign. Featley rose to the occasion despite being denied access to his library, which had been confiscated. Shortly afterwards he was allowed home to Chelsea due to his ill health, where he died on April 17, 1645. Whilst in prison Featley met the evangelist Henry Denne, who too was in prison for preaching and baptising.

The “fovrth edition” of the “The Dippers dipt or the Anabaplists dunckt and plunged over head and ears” was printed in 1646 by Nicholas Bourn and Richard Royston, in Ivy Lane (London), one year after Featley’s death and one year after the first edition appeared. It is this edition I have used and to which I refer.

The book was written to oppose congregations who call themselves ‘Churches of Christ’ meeting in England in the 1600s, who baptized by immersion for remission of sins. Who were autonomous being separate from the Church of England, ruled by a plurality of elders and deacons assisting. These congregations were Trinitarian, which was for a time denied by their enemies (re. the burning of Edward Wightman and Bartholomew Leggett in 1612). 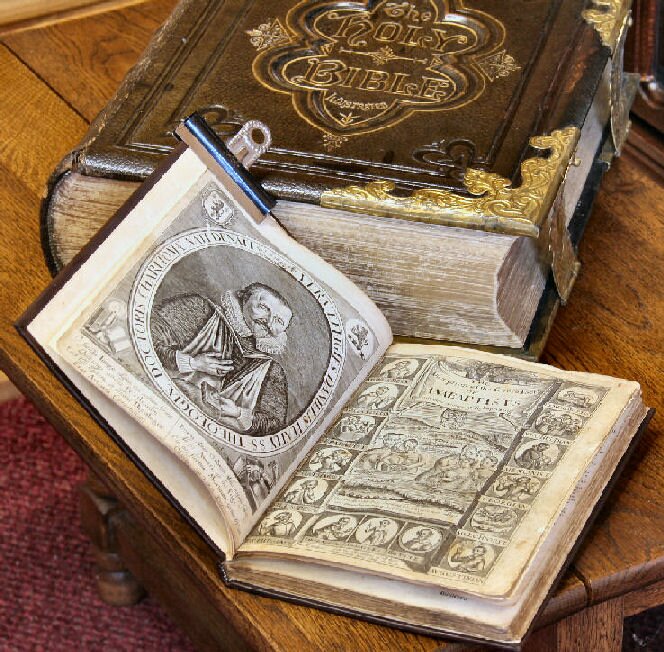 Picture above is the fourth, 1646, edition of the Dippers dipt. Behind is a King James Bible, which Featley helped to translate. The book pictured is in remarkably good condition despite being over 360 years old, it has at some point been rebound.

On page 20 the following statement is made, to which I have modernised the original spelling below the original:

“The third broached theirs in the year 1525. which was this; that baptism ought to be administered to none, but such as can give a good account of their faith; and in case any have been baptized in their infancy, that they ought to be re-baptised after they come to years of discretion, before they are to be admitted to the Church of Christ."

I understand this was printed in all additions of the Dippers dipt, Featley never retracted or corrected this statement. It was not a printers error, or it seems an error on the part of Featley. Historians opposed to the church such as Daniel Neal (1678 - 1743) who wrote his history of the Puritans, in four volumes between the years 1732 - 38, did not find fault either.

On contrary, Featley's statement agrees with the churches of Christ meeting in London in the 1530s, and Kent. Such churches were also meeting elsewhere.

We can see the church of Christ, according to the highly respected Anglican theologian, Dr Featley, existed prior to the Church of England being reformed from the 1530s onwards. Methodism started over two hundred years later. It predates John Calvin who was just sixteen years old in 1525 and the Presbyterian Church. The statement is just eight years after Luther started the Reformation, which in 1525 was just beginning, yet such churches in England pre-date Luther. The continental Anabaptists started in about 1526/7, which is after the Church of Christ mentioned by Featley, who from his statement infers they had not just stated, but were already in existence in 1525 but had come to the knowledge of the authorities at that date. Previously such congregations had been prosecuted as Lollards such as the church meeting in Tenderden, Kent in 1511. 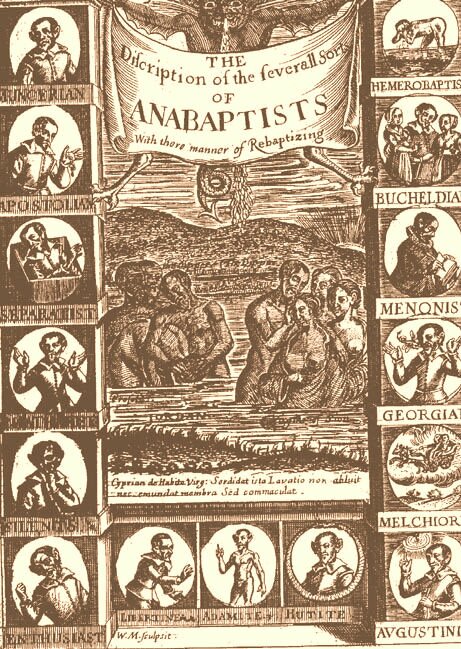 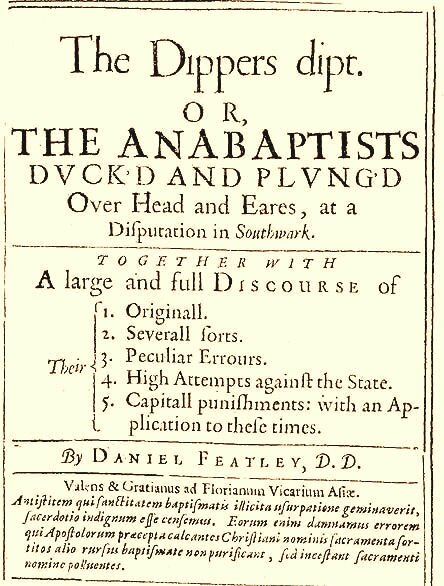 The introduction page, shown above.

In his book Featley notes several points that are of interest to us:

1/ Twice Featley notes those he opposed used the identity - Church of Christ, pages 5 and 20. At no point do they describe themselves in any other term, other than Christian.

2/ Feately attacks them for denying the Trinity, though they refute this by stating that they believe the Father, Son and Holy Ghost are God. What they are denying is the denominational Nicene Creed. Pages 2, 16.

3/ They deny circumcision is a precursor in the OT to baptism in the NT, pointing out that if this is so only male children could be baptised. Pages 6,7, 32, 35.

4/ They ague that children do not need baptism to be in the Kingdom, page 8.

5/ They defend "lay-preaching", arguing all Christian men may preach and administer baptism and the Supper, stating there is no clergy/laity divide, pages 8,25.

6/ They argue the OT priesthood is abolished and now all Christians are in the priesthood, page 9.

7/ They argue the Ecclesia is the church and not the "steeplehouse", and may meet anywhere, page 10.

9/ They deny the Church of England is a church of God, they also argue that the church of Christ is the only church, and hence, not a denomination, page 3.

11/ They say that men have free-will, not only in natural and moral, but also in spiritual actions, that man has freedom to choose or reject God's Grace whereby they may be saved (through baptism), pages 22,24.

12/ They say that Luther's doctrine is worse than the Pope's, page 22.

14/ Featley notes throughout the book they use immersion for baptising, Featley argues that sprinkling and pouring too can be used, which they deny arguing from the Greek and baptism is by immersion only, note page 25. They state that repentance and confession precedes baptism, page 29. That through baptism is it possible to enter the church of Christ.

In the introduction of Featley's book we know they pleaded for separation of Church and State.

We know elsewhere these congregations were autonomous and had a plurality of elders and deacons.

Next page - Bow Lane (London) church of Christ, meeting in the 1530s, click on logo below:

If you arrived from elsewhere you can start at the beginning, click on logo below:

This page, text, pictures, licence, are copyright of Keith and Thomas Sisman.

We understand the importance of the information contained on this web page, as with the entire web site, images, text or the entire web page may be used (borrowed/copied) on three conditions:

1/ The information copied and used elsewhere, MUST at that location, be in agreement with this web site, rather than to oppose. We have no intention of providing this hard to find information to the enemies of Jesus Christ and His Church.

2/ Those using this information MUST be Christians according to the New Testament pattern, therefore this excludes all denominational use and those who think the church of Christ is a denomination.

3/ A link MUST be provided to the Traces of the kingdom web site, using the address below -

There is no need to inform us when borrowing the information contained here, to which we wish you every success.