Heb 11:38 (Of whom the world was not worthy:) they wandered in deserts, and in mountains, and in dens and caves of the earth.

Lud's Church played a big role in established religions, because during persecution and oppression it became a place of salvation for people who wanted to devote their lives to serving God. On this page you will be able to read information about this Church and its role in Christian life, and for more detailed research or messages, contact topwritingservice.com.

Lud's Church (sometimes written as Ludchurch) is a deep chasm penetrating the Millstone Grit bedrock created by a massive landslip on the hillside above Gradbach, Staffordshire, England. The chasm is in a wood known as the Back Forest (Back not Black), in the White Peak, towards the southwest fringe of the Peak District National Park about 3 miles west of the A53 between Leek and Buxton. Over 300 feet long and sixty feet deep, it is mossy and overgrown, wet and cool even on the hottest of days.

The Lollards are supposed to have used this as a secret place of worship during the early 15th century, when they were being persecuted for their religious beliefs. Lud's Church may have been named after Walter de Ludank or Walter de Lud-Auk who was captured in the chasm at one of their meetings.

Lud’s Church became known as Trafford’s Leap, a name given by the local residents, after one of the Squires, at nearby Swythamley Hall, formally a medieval hunting lodge that once belonged to the Abbey of Dieulacres, leapt over the cleft, on horseback, whilst out hunting. 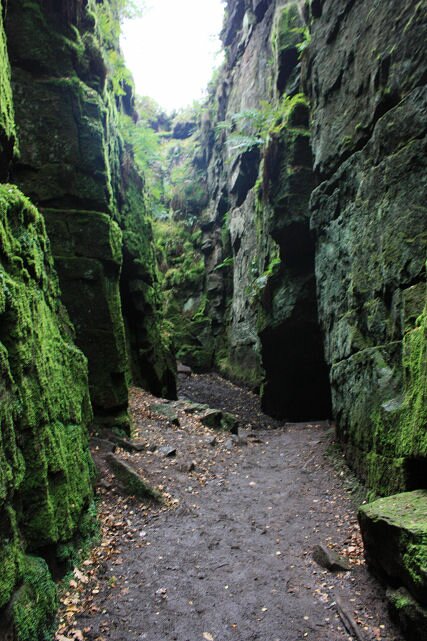 This spot has been identified as The Green Chapel – the very place where Sir Gawain met and battled with the Green Knight one new year’s day long ago.

They rode up steep slopes where the branches are bare
They climbed up rock faces gripped by the cold
The clouds were high up – but dark underneath.
Mist drizzled on moor – broke up on the hills
Each peak wore a hat - a big cloak of mist.
Streams boiled and splashed down the hillsides about…

Lud's Church is also associated with Robin Hood, it is supposed it was one of his hiding places.

This web page continues the legend that the Lollards met in the chasm known as Lud's Church, whether it is more than legend I have been unable to ascertain, nonetheless, Lud's Church is a fascinating place. The tale of the Lollards at Lud’s Church is recounted in the 19th Century guide book, 'Swythamby and its neighbourhood, past and present'. The story is attributed to “the good knight Sir William de Lacy” who was travelling through the Back Forest in 1546. The story is as follows:

Whilst enjoying the scenery, de Lacy stumbles upon the deep chasm of Lud’s Church. On exploring the chasm, de Lacy encounters an old man “engrossed in the perusal of a worn Bible”. According to the old man, the cavern of Lud’s Church had been the “instrument of many righteous works”. On prompting, the old man describes how a group of “immediate followers of Wickelf” used to hold secret religious services in the chasm, hidden from the prying eyes of the Catholic Church. This congregation was led by the zealous Sir Walter de Lud-Auk then aged seventy, whose beautiful 18-year-old grand-daughter, Alice de Lud-Auk was also a member of the group. The congregation, fourteen in number, was ranged in a circle, having their preacher, Walter Lud-auk at the centre. On his right stood a beautiful girl, Alice de Lud-auk, his grand-daughter. She was about eighteen years of age. Among the rare qualities she possessed was a matchless voice. Standing, or rather leaning against the chasm wall at the entrance was the herculean form of the head forester.

After a short but earnest prayer from Walter de Lud-Auk, the opening hymn began. At a certain place in the hymn the other singers stopped, and the wild bird-like strains of Alice warbled with an almost unearthly sound through the vaulted chamber, so remarkable was the compass of her voice. When her voice was at its highest pitch, and when all eyes and thoughts were engaged in devotional contemplation, a quick tramping of feet and ringing of arms were heard. Before any movement could be made, a tall and powerful man, clad in steel, rushed into the entrance, followed by others. The voice of the singers was hushed, the man stopped short, and waving his sword cried "Yield in the name of the Church and of his Gracious Majesty King Henry."

The Lollards seized their weapons and prepared to stand on the defensive, but were commanded to desist by Walter de Lud-Auk.

All obeyed except the forester, Henrich Montair, who seized the officer in his iron grasp, dashed him back with such force among his followers that they were irresistibly borne back to the entrance of the cave. Then, drawing his sword he shouted to the congregation to escape by the other outlet, while he defended the entrance. One of the men fired as the forester pressed forward. The bullet whistled past his shoulder, but a loud shriek burst from behind. The forester turned around, almost afraid to trust his eyes. His foreboding was but too true; he saw the beautiful Alice, supported by her grand-father, the fatal bullet was lodged in her bosom.

This web page is based on a sixteenth century legend retold in a nineteenth century guide book. It is possibly true, or part true, but the implication that Alice sung solo is unlikely as the Lollards did not engage in such. Taking the congregation to London would have been very impractical. The ready use of guns in the fifteen century too is unlikely. The arquebus, the forerunner of the musket were in use, but the bow and arrow was the English favourite at that time - But the Lollards (a name they never used) who called themselves Christians, and the church, The church of Christ did exist, who held their meetings in private, hidden from the Catholic Church and secular authorities. Maybe this fascinating legend is a glimpse back at a time when the chasm was used as a meeting place for Christians, therefore there might some truth in this ancient tale from a bygone age.

Next - Churches of Christ in Kent, before and during the Reformation.