Miscellaneous photos of pagan sites in England and Scotland.

Below are pictures from the North West of Scotland, not far from Oban.

An ancient Standing Stone, at the western edge of Loch Nell.

The same standing stone with a cairn in front, and a mound in the background (right) which has on top a stone circle.

Standing stones became crosses as the Catholic Church evangelised northern Europe.  These are early crosses at the monastery at Iona.

Below are later crosses at Iona, more familiar with the ones we are used to seeing.  The circle is the symbol of the Sun God with the cross inside.

Below is the Serpent Mound, at Loch Nell, Scotland.  Here the remains of Scottish Kings were prepared to be sent to the holy island of Iona, later to become a Celtic and even later a Catholic centre.

The Serpent Mound is world famous, except in Britain where it is all forgotten. It is not even listed as a site of heritage, or marked on the large scale ordinance survey maps! It was in a sorry state on private land, to which we obtained permission to explore the mound, being surrounded by sheep (not in the pictures). As it is not listed, there is nothing in theory to prevent a farmer from ploughing the thing and removing it from the landscape. I will see that it is listed as an ancient monument later this year. We stayed in 'bed and breakfast' at a local game keeper's home, a short drive from the mound. The game keeper was very helpful and the decision to stay there was the right one. We wanted to stay with locals with whom we could discuss the mound and our choice was excellent.

Thomas, Joanna, Tabitha and Sarah stand next to the head of the Serpent, the camera is pointing westwards.  Here once was a altar and stone circle.

In the picture below the elongated 'S' shape of the mound can be seen.

Above is Loch Nell, taken from the Serpent Mound.  In the centre of the picture on the opposite shore is a 'cranog', a man made island for religious purposes.   It has several trees growing on it.

In the picture below is Ben Kruachen, the holy mountain of the pagans.   It's twin peaks can be seen through the mist in the left of centre of the picture. Such mountains worldwide are associated with pagan places and the Ark of Noah.

In the centre of picture below is a cairn, the picture being taken from just below the head of the Serpent looking south.  This is a 'chambered' cairn where maybe cremations once took place.

Here again is the cairn, with the Serpent Mound in the background (to the left).

From Loch Nell in pre-Christian times lead a processional route to the holy island of Iona where the Druids prepared the kings of Scotland for burial. This holy island was taken over by the Celtic church.

Below is the abbey church of Iona, for many years the centre of Celtic Christianity.

Below, looking to the Island of Mull, from Iona.

The harbour and Iona abbey below.

The church building below is dedicated to St. Michael, the Catholic saint of 'High Places'!...  This building is found 1100 feet on top of a volcano in Cornwall at Brent Tor.  The church is still used. 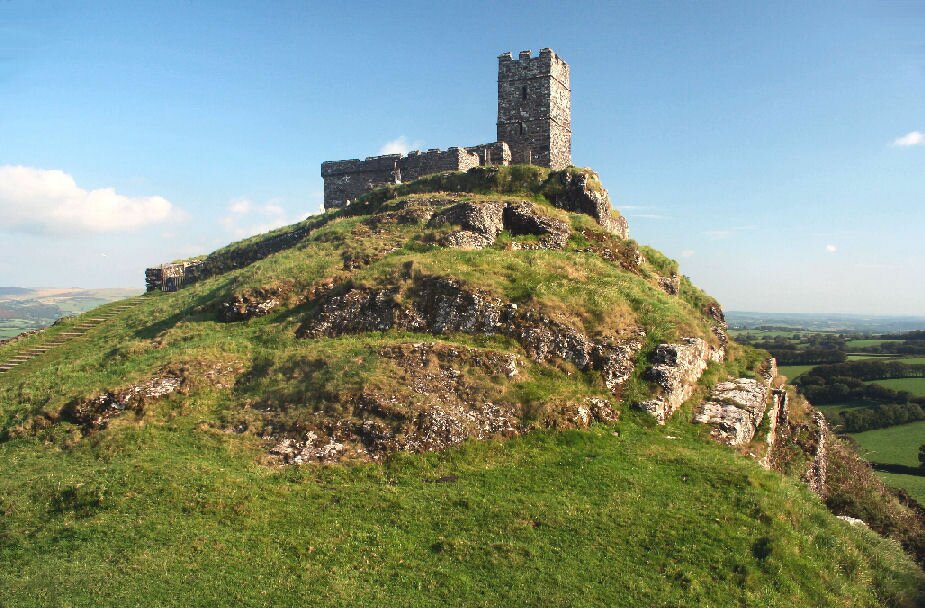 Another volcanic mount dedicated to saint Michael. This one is close to Penzance at Marazion.  When the tide is in access is by boat, when the tide is out, a causeway is used to travel the short distance.  At the highest point is a church, yes.. Dedicated to St. Michael!

Look closely... You just might see a 'church' on a high place.. At the highest point!!  This one is dedicated to St. Michael being built in 1409 as a hermitage chapel at Roche, Cornwall. 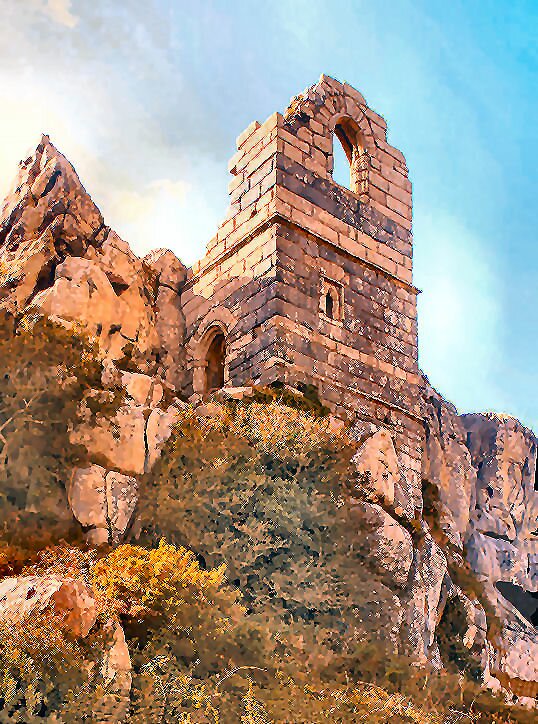 Again in Dorset, Knowlton Church was built in the centre of an earth 'Henge', a pagan circle, not far from the famous Stonehenge...

Below, former worship mound where laws were made in oxford which was in use into the thirteenth centuries where parliaments were held.