Jam 2:20 But wilt thou know, O vain man, that faith without works is dead?

Waldensian  congregations were well established in the Chilterns, the Vale of Evesham, Worcester, Tewkesbury and other parts of Gloucestershire in the twelfth century. By the 1400s these congregations were being called Lollard. From what we can learn from what few facts exist they called themselves Christians and the church, The Church of Christ. Each congregation was autonomous served by a plurality of elders. Membership was by immersion for believers whereby the blood of Christ through baptism washed away sin.

One of the leading families, that of Baron de Tracy had been members of the Church of Christ for many years. One of the members of the London Bow Lane congregation, Richard Tracy, took his MA at Oxford. He settled down in Gloucestershire, where from 1559 he held the position of Sheriff, having also been a Member of Parliament, Justice of the Peace and Royal Commissioner. He owned the lands of the Abbey of Tewkesbury, which came into the family by grant of land from the crown.

As owner of the former land of the Abbey of Tewkesbury, Richard Tracy is interesting to us and maybe it is more than just a coincidence that immediately opposite the Abbey was a meeting place, converted from several houses, owned by a Church of Christ originating from an unknown date. The congregation is known to have been well established by 1623 and only much later did the congregation convert to Calvinism (becoming part of the Baptist denomination). Some of the descendants of William Shakespeare were members of this congregation and are buried in the graveyard. The old Baptist Chapel (how it is now known) remains, having been restored by the local council. Did Tracy provide the houses, owned formerly by the Abbey, for the congregation to build a meeting place? Such a location required powerful men who could defend the church from persecution and the Bainhams and Tracys were such people. An interesting question but unfortunately one we cannot answer. The congregation goes back to the 1500s when it was Lollard, this is not doubted, and neither is the fact the the chapel is the oldest existing Church of Christ meeting house known to exist.

The chapel is situated in a typical narrow alleyway of the fifteenth and earlier centuries. Such alleyways were not safe due to fire, fire spreading quickly from one building to another. Hygiene was a known cause of illness with such close proximity of dwellings and lack of modern sewerage. Tewkesbury is fortunate to have such old alleyways still remaining with their wood framed buildings. When first constructed the windows would not have had glass and an open fire would have provided heat with partitions taking to smoke into the roof, where it would have escaped by a hole under a small raised roof (to prevent ingress of rain). When the building was first used as a meeting house for the congregation is unknown. Such meetings were illegal and in this case, held right under the noses of the authorities. The building would have been retained in the style of a house until 1689 when freedom of worship was granted by the Toleration Act.

Below, the passage way to the chapel as seen from the Abbey. 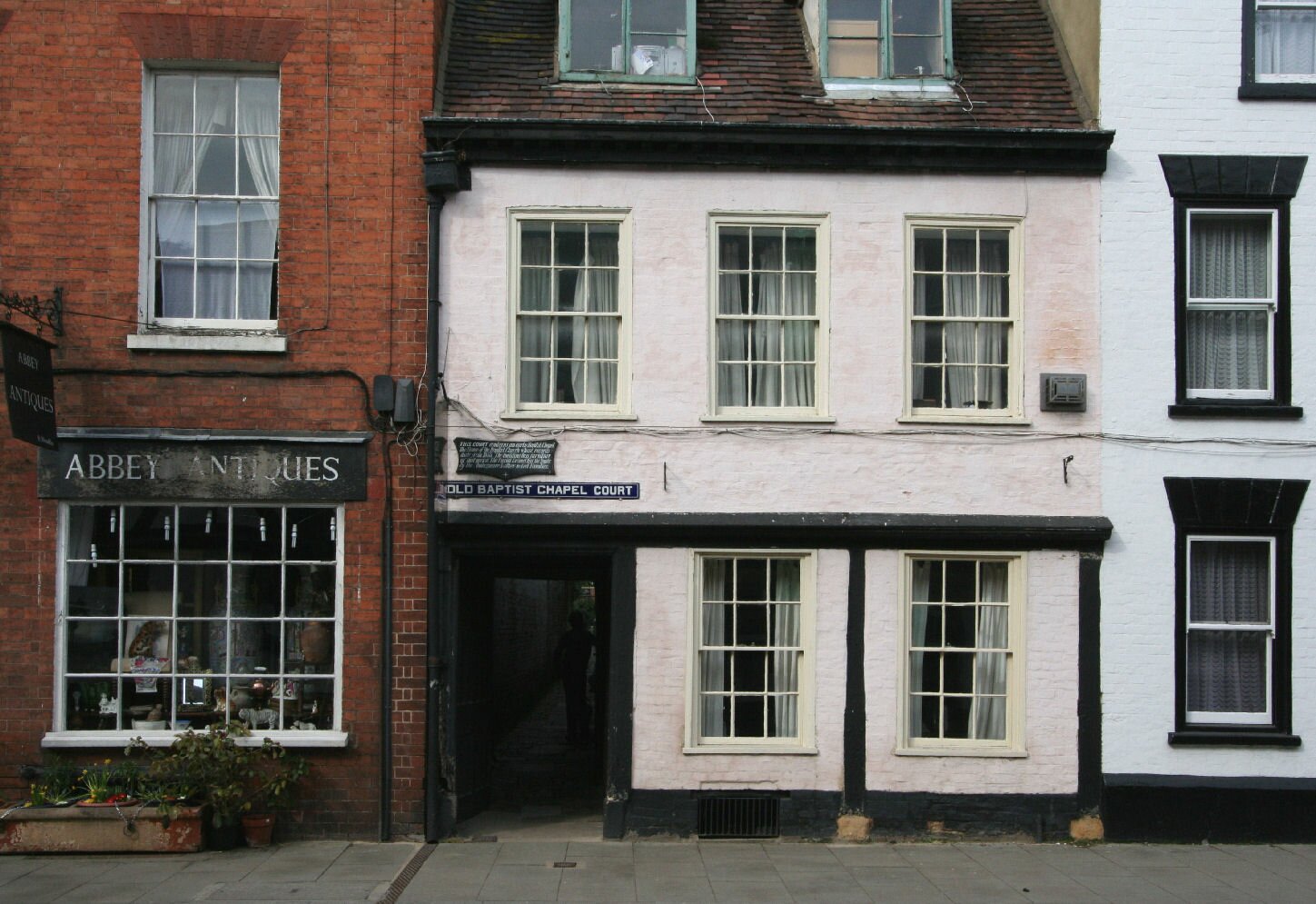 Below, the passage way and wood framed chapel, a building dating back to the 1500s looking towards the Abbey, the grey stone Abbey tower can be seen. 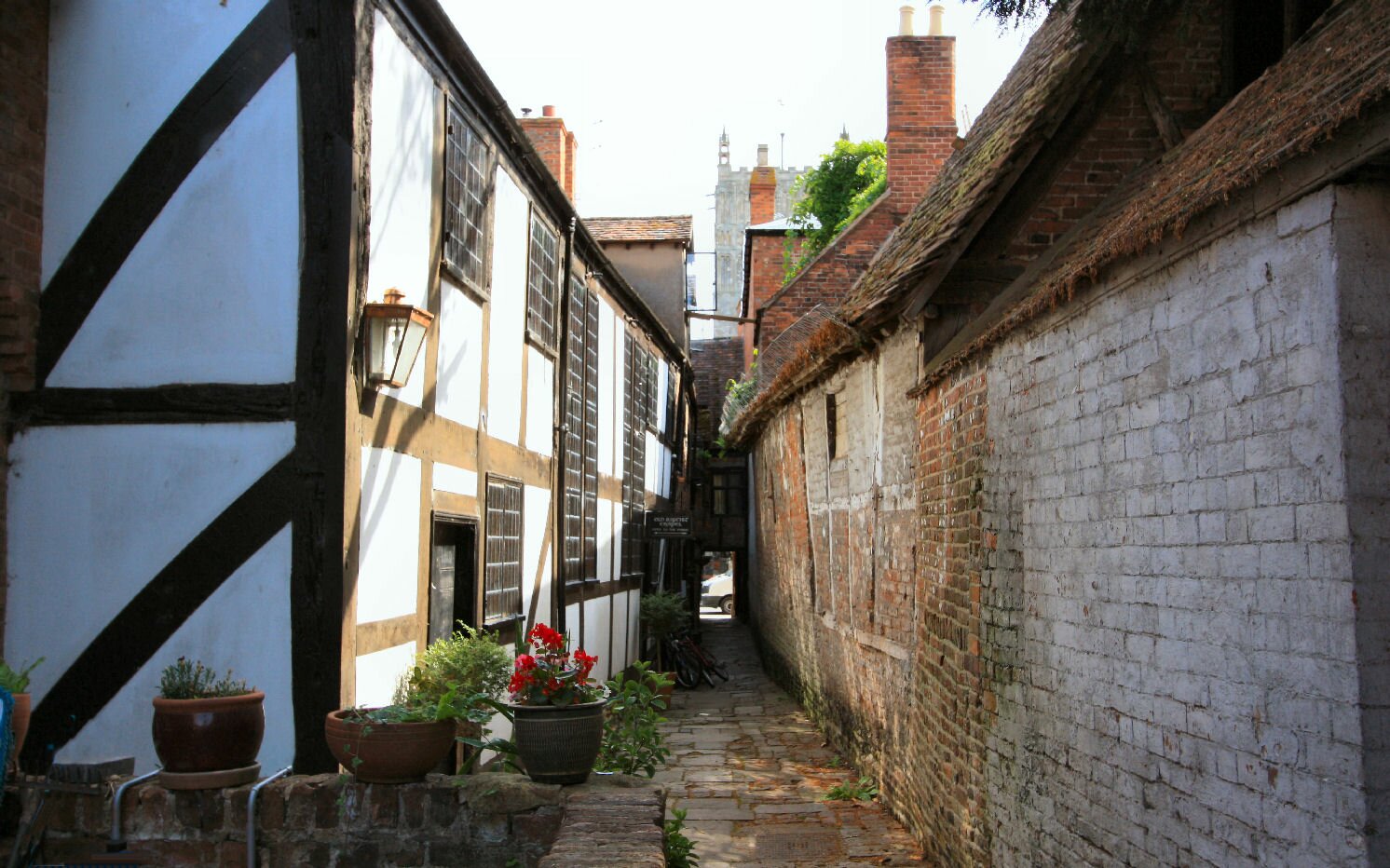 Below, the Abbey which is just a minutes walk away across the road. 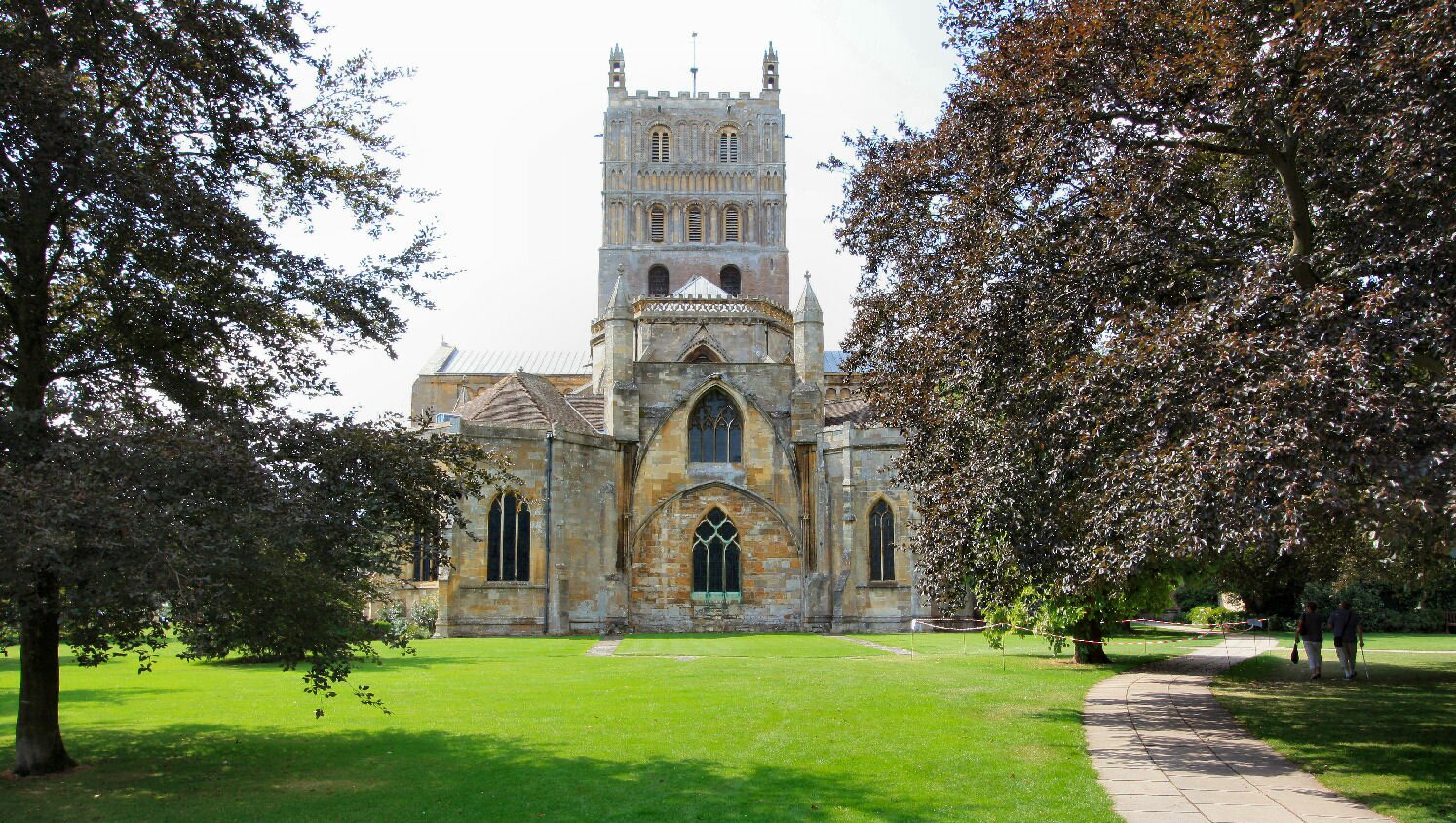 Below, interior pictures or the meeting house restored as to how it looked in the 1720s when it was modernised.

Thomas stands in the baptismal pool, originally they used the river Avon, the baptistery was added in 1662. 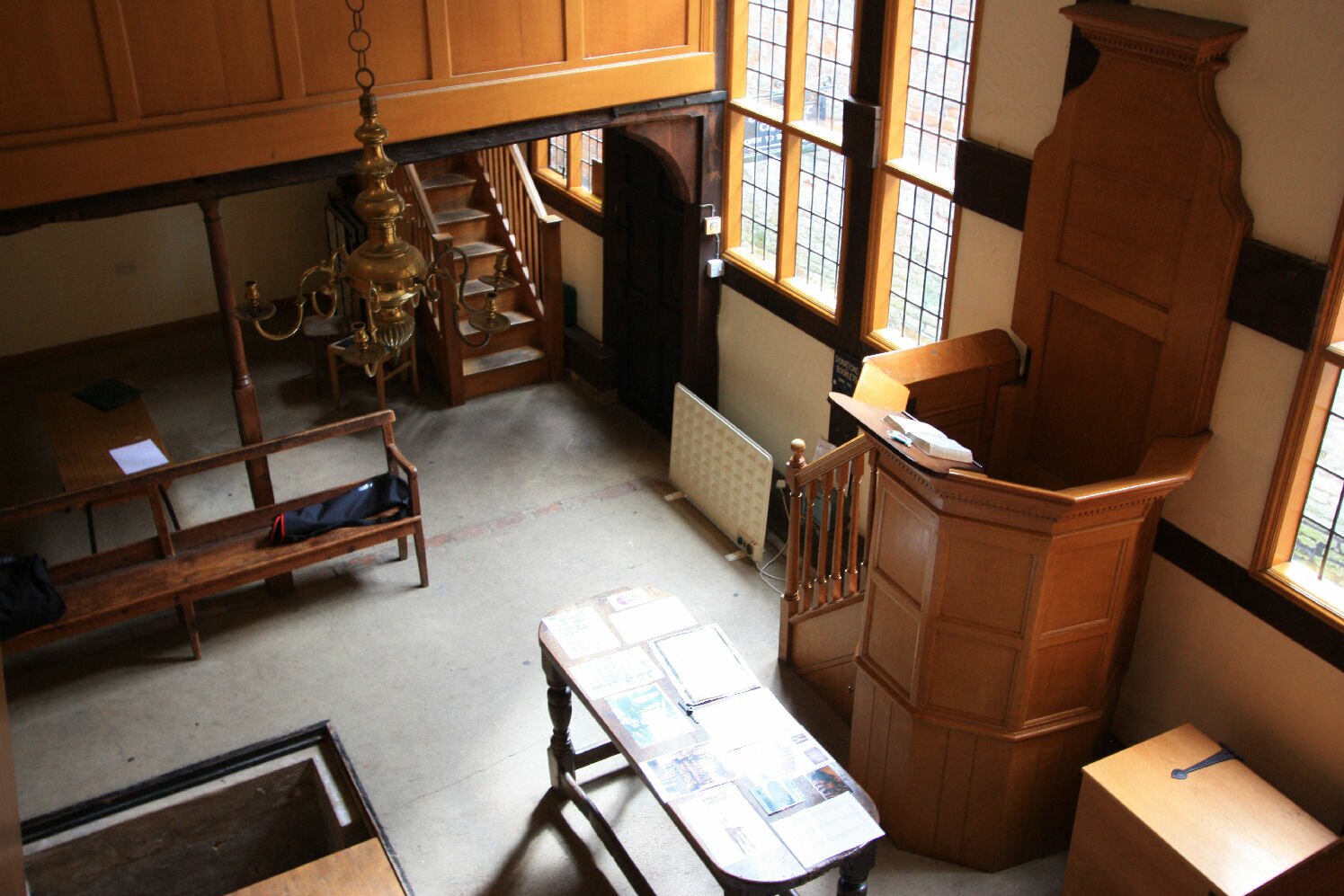 Below, the passage way leads to the graveyard that was used from 1655. 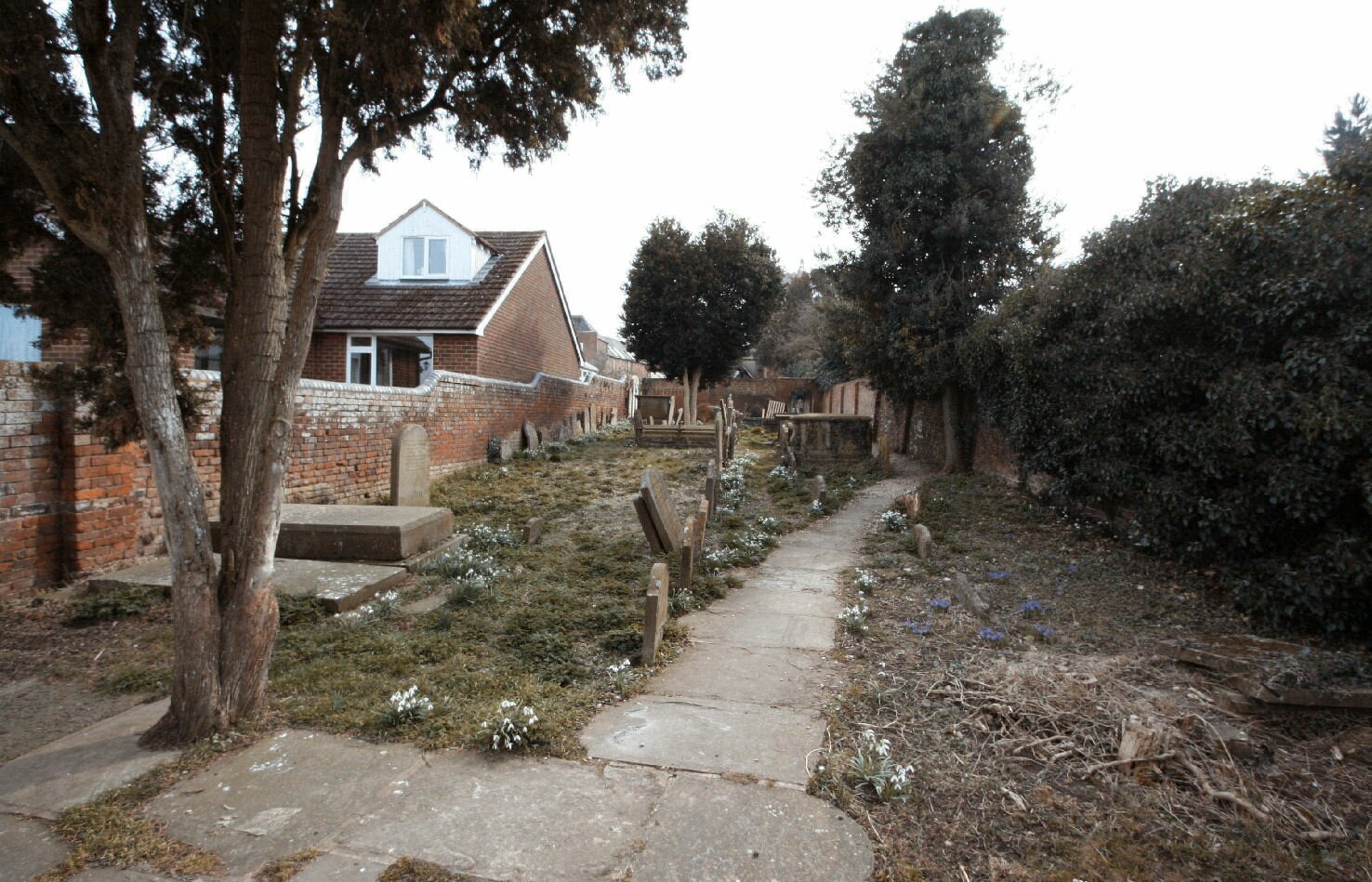 Below, the graveyard and river that was used for baptisms. The river is the Mill Avon, a tributary of the Avon. 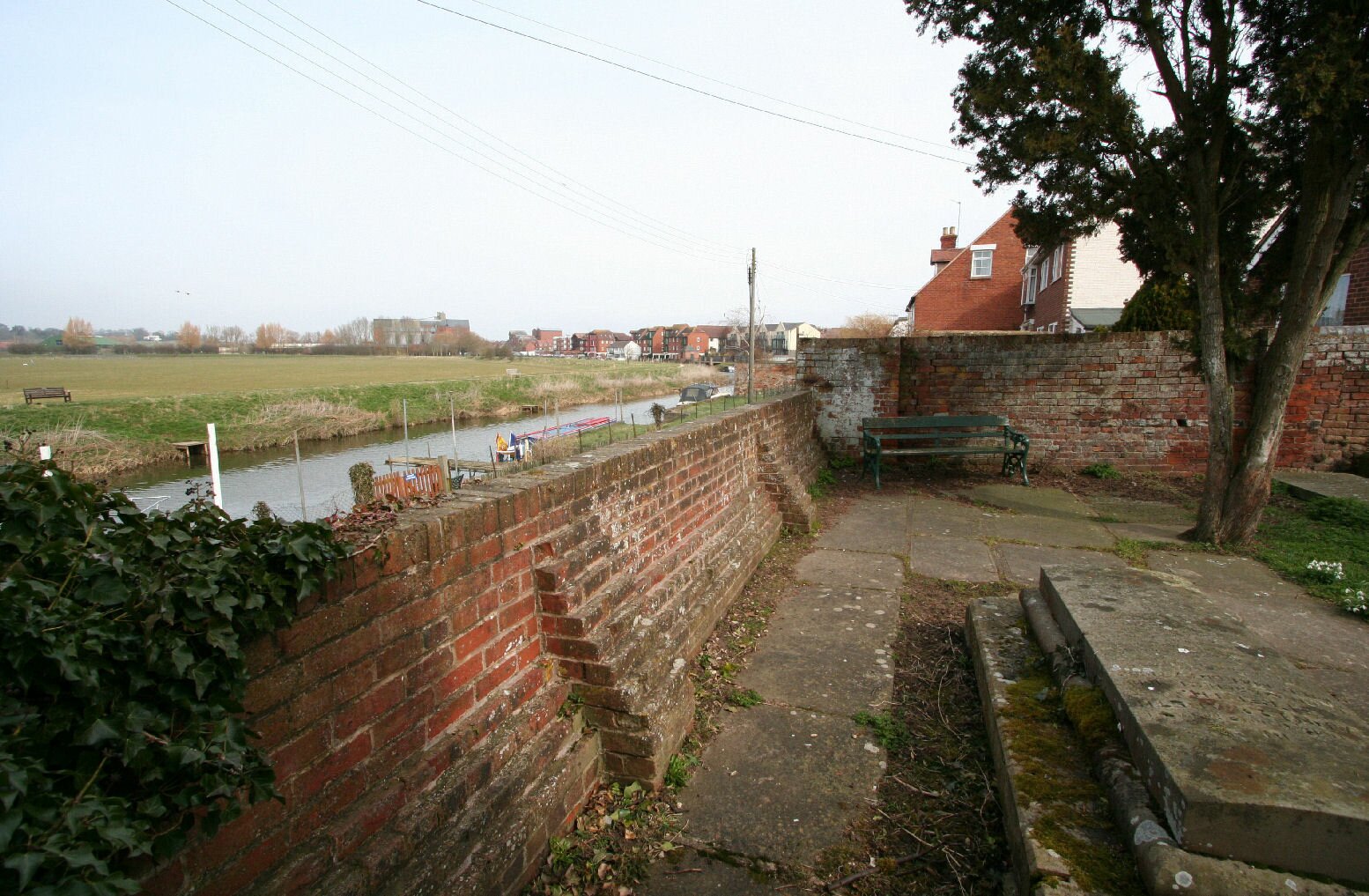 Below, the passage way leads from the graveyard to the chapel. 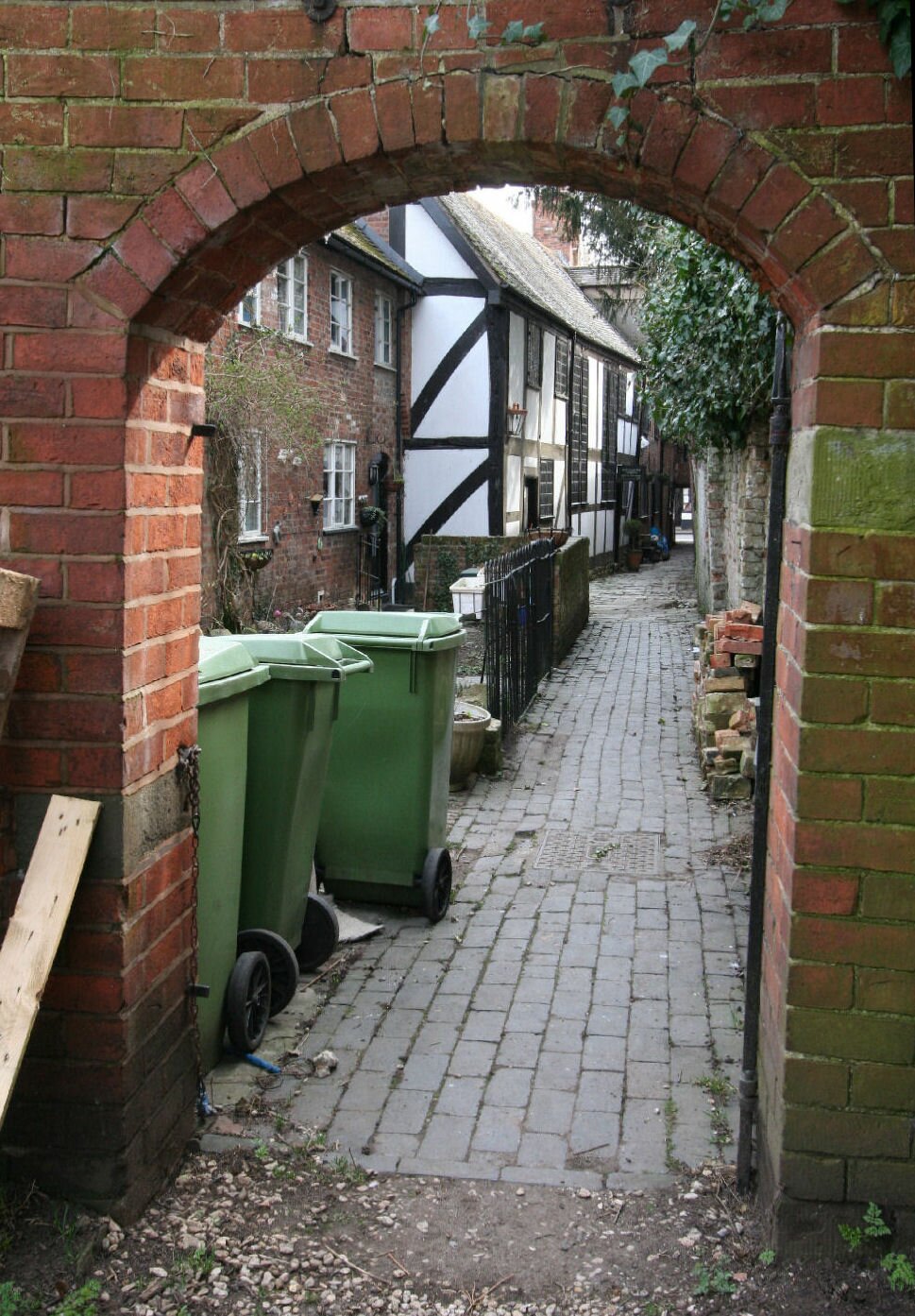 Below, pictures of the chapel and Church Street, the main street in Tewkesbury. 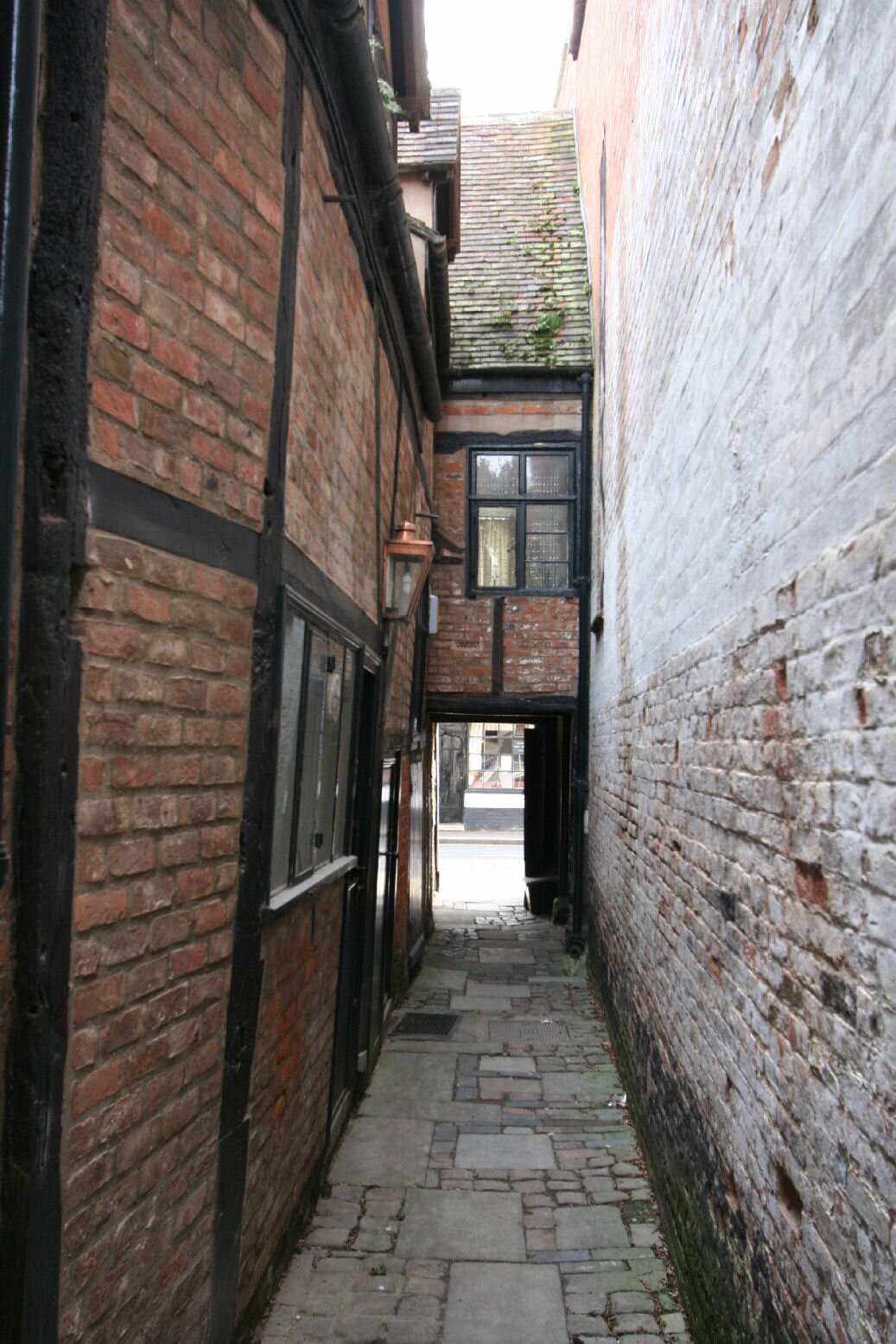 Below, the alley can be seen to the right of the large red brick building that is in the centre of the picture. A wood sign hangs above the alleyway to the left of the white building. The picture is taken from inside the grounds of the abbey. 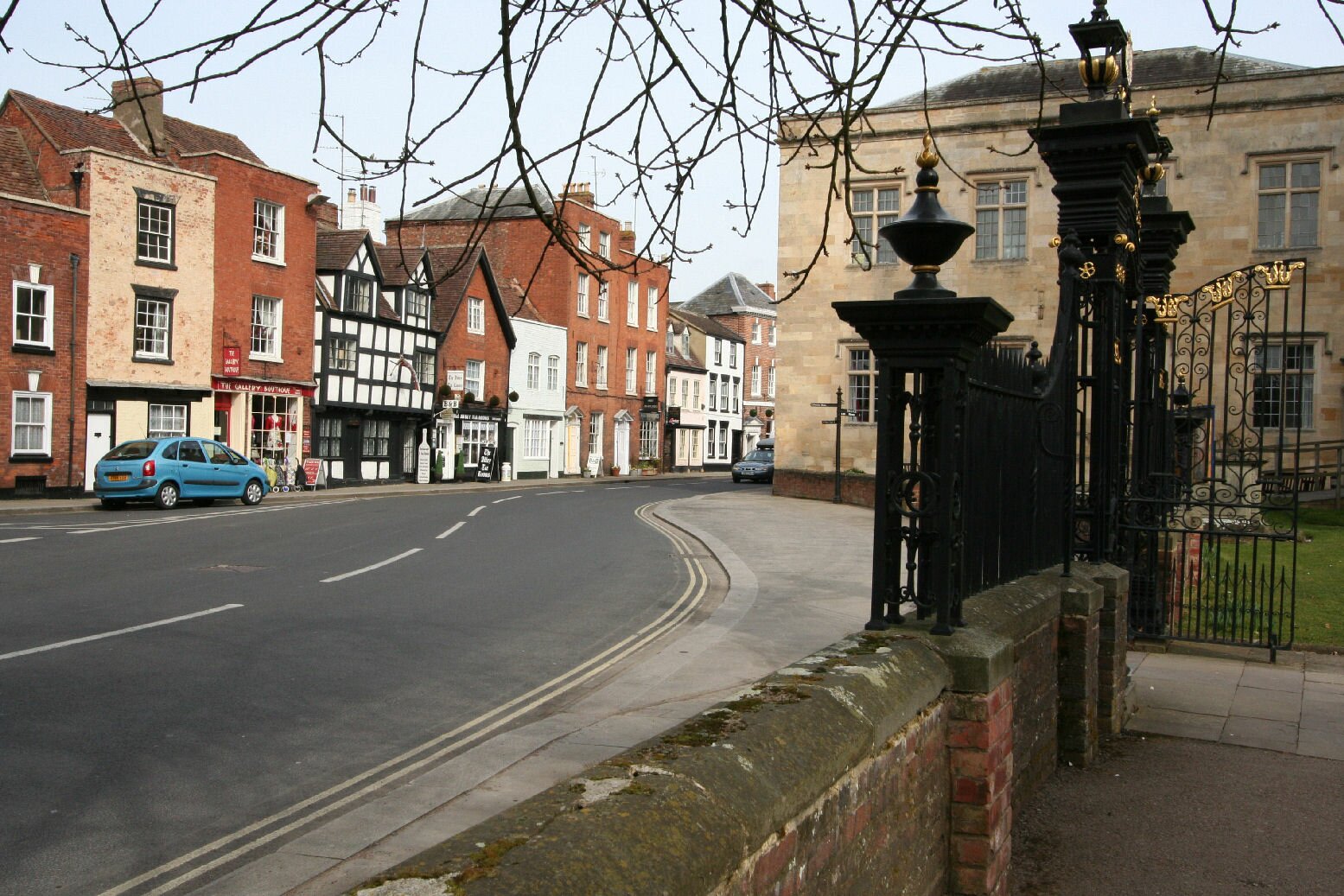 Below, an old inn, the Bell Hotel, taken in the opposite direction from the abbey. 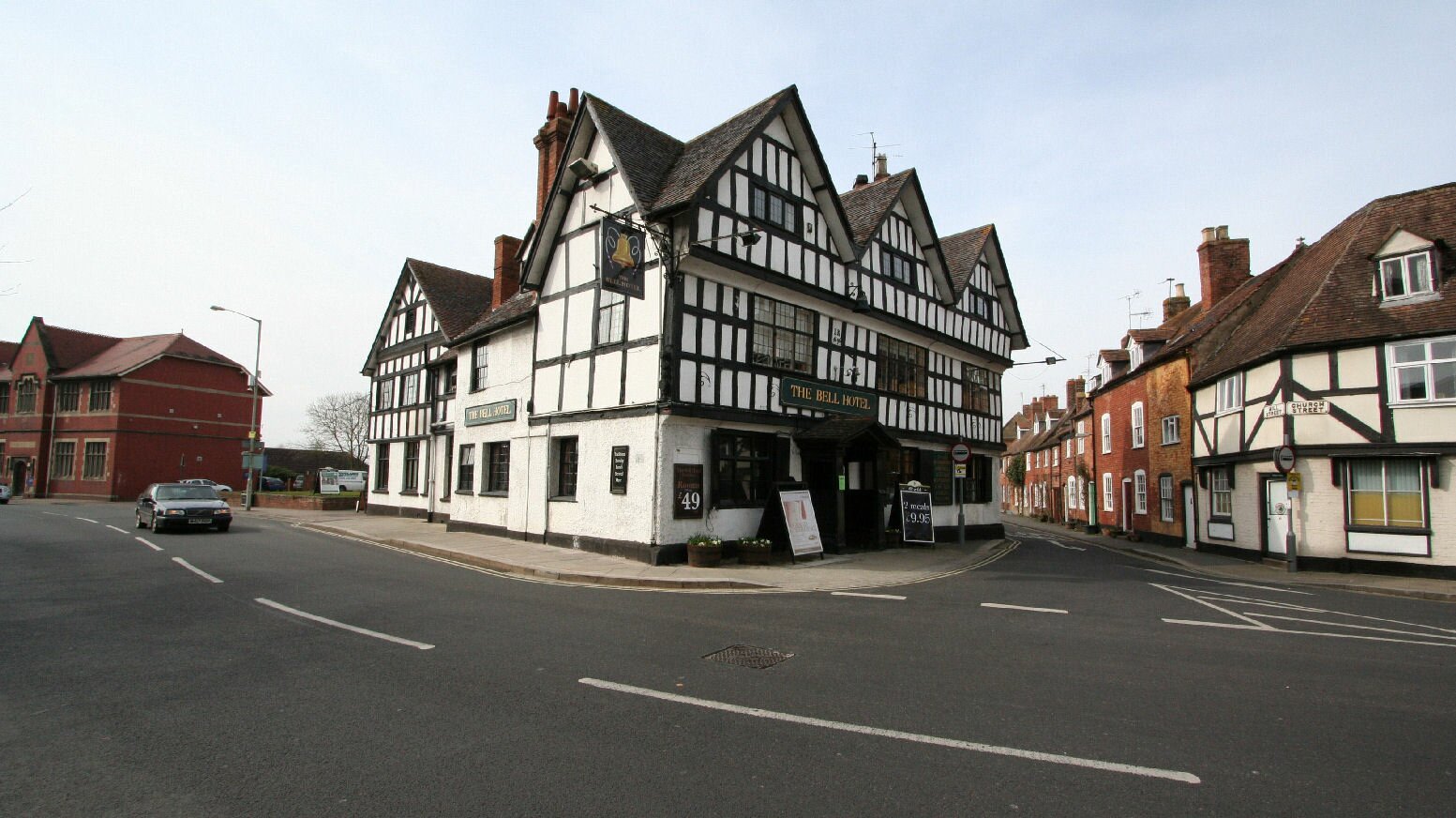 Copyright - We understand people may wish to copy and use this information, please click here to know what we allow, thank you.