The Book - Traces of the Kingdom

To our knowledge this is the definitive work on the history of the pre-Restoration churches of Christ in England and Europe.

The book is not a printed version of the web site, it contains much more information, the web site is an introduction, the book is the definitive work on the history of the pre-Restoration churches of Christ in England and Europe.

The book is printed both in the USA and the United Kingdom so carriage costs are kept to a minimum for purchasers. Several bookstores will be holding it in stock.

Since publishing the first edition there were some questions I needed to deal with and surprisingly, have been dealt with to further strengthen the case I have made, churches of Christ have been in England for a thousand years and earlier in Europe. Lack of records prevents me going back further at this point in time, though I plan to undertake more investigations. Another issue is that of repentance, Catholic Bibles (the Vulgate) used penance with the idea of purification in the fires of purgatory and good works. Since the first edition I have been able to determine that the Bibles used by these pre-reformation churches of Christ used in the old English words that agree fully with our modern English words, repent and repentance. The Bibles used by these Christians influenced Tyndale, and in turn influenced the King James Bible whose 400th anniversary is 2011.

The second edition has 658 pages and 92 pictures, made up of photographs, woodcuts and illustrations. This time it has an index.

Pictures below are of the new second edition, to purchase, click on book or link above. 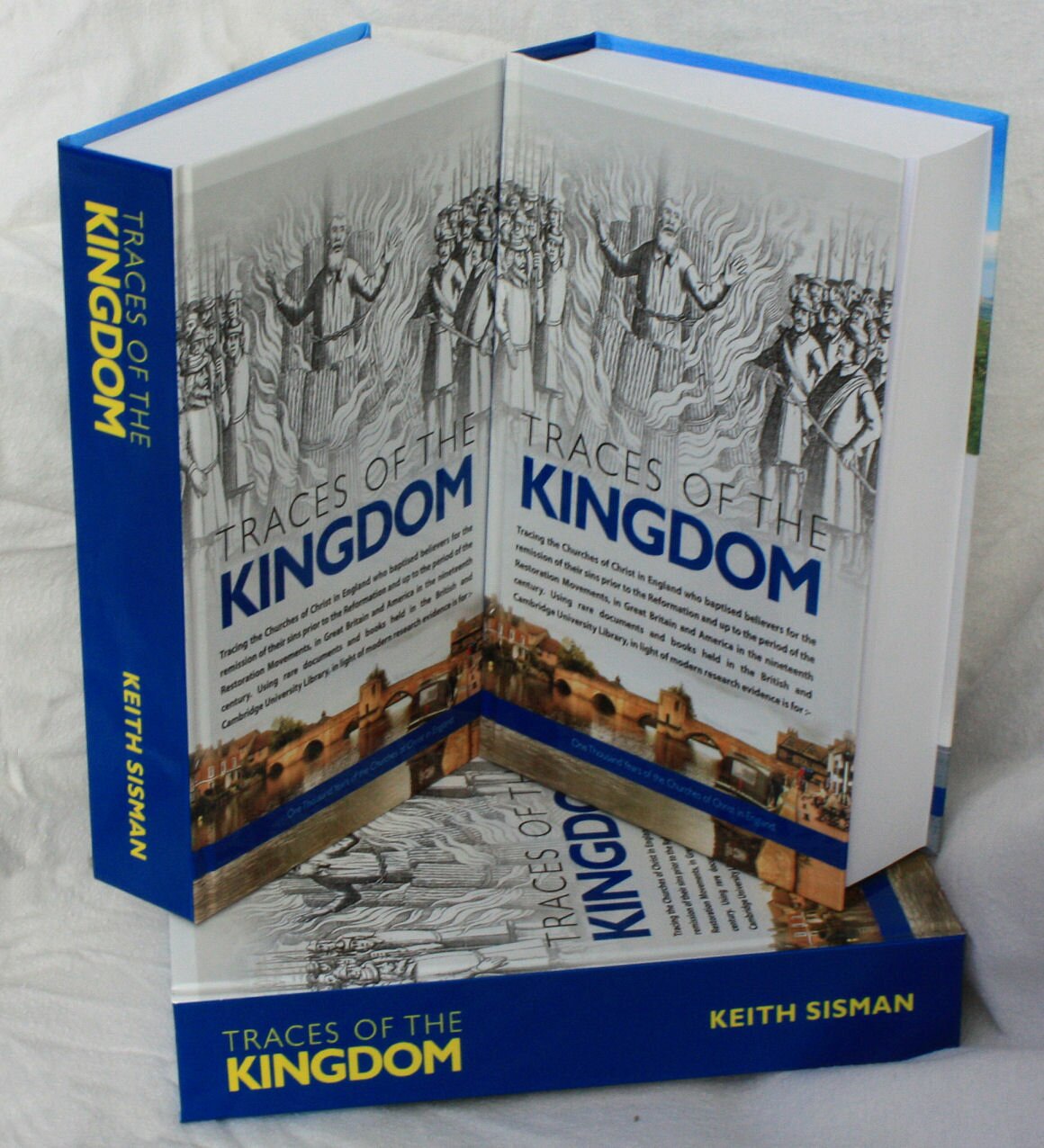 Pictures below are of the new second edition, inside and rear cover. 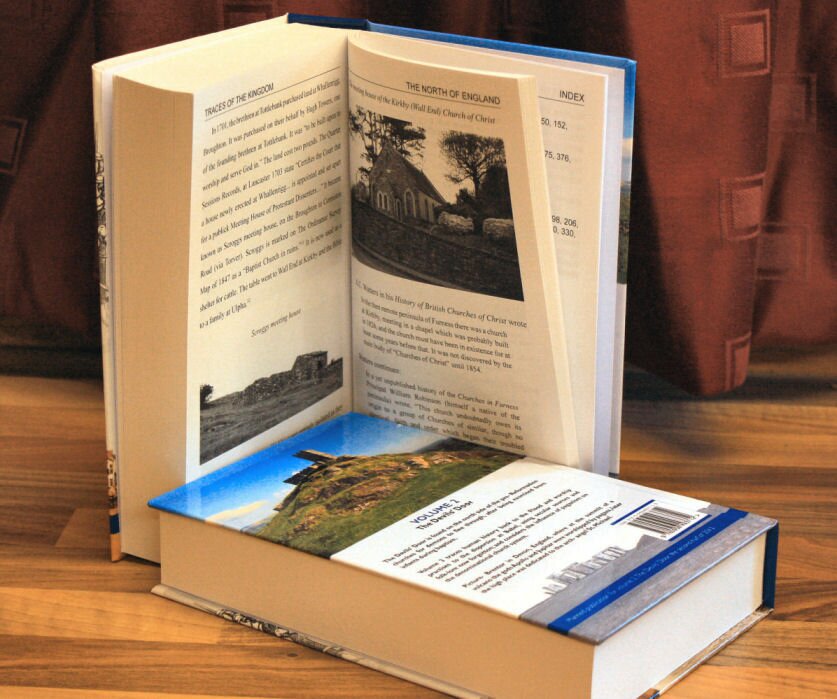 Nearly fifteen years of research notes unravelling facts ignored by others are compiled into the book, providing evidence that so called heretic groups, before and after the Reformation, were Christians. Their only creed was the scriptures who used the identity Church of Christ, baptising believers by immersion for the remission of sins.

Contents of Traces of the Kingdom:

Chapter two – The Epistle of Mathetes to Diognetus otherwise known as ‘The Epistle to Diognetus’. The letter is a wonderful post apostolic example of a Christian apologist against heathenism.

Chapter three – Apostasy – the falling away.

Chapter five – America – its early Christianity, the origin of the original inhabitants and the ‘Flat Earth’ myth refuted.

Chapter six – The early European Waldensians and Lollards, who called themselves the Church of Christ.

Chapter seven – Waldensians and Lollards, the English terms as mentioned previously are derogatory, and applied to many who fell foul of the Roman Catholic Church and State, which were closely linked and interdependent.

Chapter nine – John Frith, classed by established historians as a Lollard or Lutheran, was actually a member of the Bow Lane (London) Church of Christ.

Chapter ten – William Tyndale, member of the Church of Christ.

Chapter eleven –The Bow Lane, London, Church of Christ, meeting in the 1530s.

Chapter twelve – The burning of Edward Wightman and England’s legal system (or lack off).

Chapter fourteen –Dr. Daniel Featley (1578-1645), author of The Dippers dipt or the Anabaptists dunckt and plunged over head and ears. His book was written just prior to the Baptist movement, to oppose the Churches of Christ. If offers a witness to the then Churches of Christ through the eyes of an enemy.

Chapter fifteen – Chapter 15 - Churches of Christ in England in the 1600s. The forgotten tale of Thomas Lamb and the Bell Alley Church of Christ, Henry Denne and other London congregations in the 1600s.

Chapter sixteen – Excerpts taken from the minutes of the Warboys and Fenstanton Churches of Christ, meeting in the 1650s.

Chapter seventeen – Churches of Christ in England in the late 1600s.

Chapter eighteen – The North of England, Tottlebank, Ulverston, the Furness Fells and later Churches of Christ.

Evidence refuting various Baptist, Reformation and sadly, some modern but incorrect Restorationist histories, which denies the existence of the Churches of Christ in the Middle Ages and later will be provided. Churches of Christ in Europe pre-existed the Reformation of the Roman Catholic Church, along with the various Baptist denominations, information will be included with sources.

I have also quoted from Alexander Campbell, as he to had similar views to my own regarding churches of Christ pre-existing the Restoration and Reformation.

Churches of Christ prior to the Reformation were wide spread across Europe, later to be persecuted by Protestants and Catholics alike. Calvin and Luther both worked furiously with hatred against the Lord's Church. Eventually it was Calvinism and denominationalism that almost destroyed the Lord's Church prior to the Restoration Movement of the early nineteenth century, with few congregations surviving to that time.

The churches of Christ are not a new church, from the first Pentecost after the Resurrection, evidence suggests for the last two millennia somewhere Christians have met and propagated the gospel. Neither are the churches of Christ a denomination, in doctrine they are not Catholic or Reformed, but biblically based.

A companion volume, the Devils Door, documenting that the denomination system is pagan in origin will follow in early, 2012. This book will also be a refutation of evolution showing that in order for the atheist to propagate evolution, they have had to either lie about, or revise history. The Devils Door will correctly start world history after the Flood, at Babel, prior to the dispersion using secular sources denied to students of history. History has been grossly neglected or denied by secularists pushing their Godless hypothesis of Evolution which will be remedied in the 'Devils Door.'

Who will benefit from the books?

The book is written to edify and defend Christianity.

The book is written to refute the falsehood that churches of Christ are a denomination.

The book is written to refute the churches of Christ are a development of the Reformation and are somehow protestant.

We hope that it will be used in evangelism.

Its attractive design will make an unusual and interesting present.

Anyone with an interest in the truth of the one Church, the Church of Christ, will benefit.

Homeschoolers with an interest in true history rather than the revised Godless lies of the agnostic.

Return, use link below to return to the FIRST PAGE, or use your browser: