Iohn Murton and the Newgate church of Christ, London

1Pe 4:12 Beloved, think it not strange concerning the fiery trial which is to try you, as though some strange thing happened unto you:

We know only a little about John Morton's early days, he first met Thomas Helwys in about 1606 at Gainsborough, England. The two would become life long friends and co-elders both in Holland and the church in London.  Morton had been an elder at the Epworth congregation, at presumably a young age.

John Morton had been an elder of the church in Holland along with fellow elders, who were most likely, Thomas Helwys, William Pigott and Thomas Seamer. These brethren had already resolved that a plurality of elders was the scriptural pattern and that the office of pastor was the same as elder.

We know these churches had acapella congregational singing and that women were allowed with the men to partake together of the Lord's Supper, held each Sunday. Later some Calvinist congregations who became Baptist would exclude women from these acts. Morton and Helwys were opposed to the idea of covenanting which was popular amongst the separatists, stating the way into the church was via baptism.

At first it seems the congregation first met at Spittlefields, London in about 1612 before moving to Newgate, home of the famous prison at London Bridge.  The congregation had first met in Amsterdam, before moving to London. Helwys died in prison by 1616 according to his brother, Geoffrey, which is fortunate in that he did not have to suffer the flames. Morton too found himself in prison. It seems when Morton came out of prison he was both one of the elders and preacher for the congregation.

Morton opposed succession of baptism and clergy teaching of baptism "we affirm that any disciple of Christ in what part of the world whatsoever coming to the Lord's way, he by the Word and Spirit of God preaching that the way unto others, and converting he may and ought also baptise them." Morton also stated "I say it is a mere fixation, there is not the least show in all the Testament of Jesus Christ, that baptising is peculiar only to pastors, which might satisfy any man of reason ; neither can it be proved that ever ordinary Pastor did baptise. And it is most plain, converting and baptising is no part of the Pastors office, his office is, to feed, to watch, to oversee, the flock of Christ already the church, his charge is to take heed to the flock, and to feed the church, and to defend them in the truth against all gainsayers: Further then which, no charge is laid him by virtue of his office; That he may preach, convert and baptise I deny, not that another disciple may, but not either is required, or he doth perform it by virtue of his office; no proof for that imagination can be showed: and therefore it remains firm and stable, every disciple that have ability is authorised, yea commanded to preach, convert and baptise as well and as much (if not more) than a Pastor."

Morton also wrote regarding baptism and the church "But first I will lay down a main foundation, which being sufficiently proved, the evident truth shall plainly appear: and this it is; That members and Churches of Christ, are so made: both by faith and baptism, and not by the one only, which being true; it will follow, that neither the church and members of Rome, are members of the Church of Christ, because Faith is neither required nor performed thereto; nor yet any profession of people, that separate from Rome as no Church of Christ, retaining Rome's baptism, and building new churches without baptism.

That the members and Church of Christ are so made by Faith and Baptism, even both, it is proved in Rom 11:20 &c.. so that to be gathered into the name of Christ, by being Disciples and baptised, is, to be made members of his body (which is his Church) of his Flesh and of his bone:.. Thus Christ made Disciples, we must be the sons of God by Faith, and put on Christ by Baptism... and we are made partakers of Christ, by having the beginnings, which beginnings are Repentance, Faith and Baptism, other beginnings, or foundation can no man lay.

This is clear these brethren maintained that any church member might preach, make converts and administer baptism and through baptism entry is into the church of Christ.

The English above has been slightly modernised for clarity. The use of 'Church of Christ' is found in the original, there being on my part no additions or subtractions, just the modernising of the English.

The Newgate congregation congregation was located close to St. Paul's, within half a mile from the Bell Alley congregation.  Across the river Thames via London Bridge, the only bridge in this time, they were about two miles from the Southwark congregation. All three being in what we now know as London. The Southwark church was the most liberal of the three, accepting into communion those who had been baptised as infants, though they taught believers baptism. In the 1590s several churches of Christ existed in London, but their locations remain a mystery at this time apart from Coleman Street and Bow-Lane, the later which may have ceased to meet at this time. In this period the sentence was death by burning alive for any member of the churches of Christ in England. Other earlier churches outside of London going back prior to the 1500s, and hence the reformation, were in fellowship with the London congregations. These congregations used the identity 'church of Christ' and opposed Calvinism, preaching and practising baptism for the remission of sins using the formula "faith, repentance and baptism". They must not be confused with the various Baptist denominations which came into being in the later 1600s.

Churches of Christ in the 1620s existed in London, Lincoln, Epworth, Sarum (Salisbury), Coventry, Tiverton (Devon), Warrington (Hill Cliff), Plymouth, Amersham, Olchon (Wales), Stoney Stratford, Eyethorn which went back into the 1590s and Monksthorpe (Lincolnshire). Others would start or become known from the 1620s onwards.

Another leaflet has come down to us from this period that states "Wherein it is clearly shown and out of good grounds demonstrated that baptism instituted and ordained by the Lord Jesus Christ, for those that believe and repent and was taught and used by his Apostles and observed by the primitive church. As also how that in process of time the baptism of children instead of true baptism was brought in and received, and by divers councils, Popes and Emperors commanded to be observed. Mark 16;26 He that shall believe and be baptised shall be saved, But he that will not believe shall be dammed".

John Morton, preacher and an elder of the church of Christ meeting in Newgate died sometime between 1624 and 1626.

Below, the Old Bailey, Newgate, London, a few minutes walk from Bow Lane and St. Paul's. Here was a meeting house in the 1600s where the Newgate congregation met, and where the family of Edward Wightman fled after he was burned alive in 1612, the last man so executed by burning in England for religious "heresy". 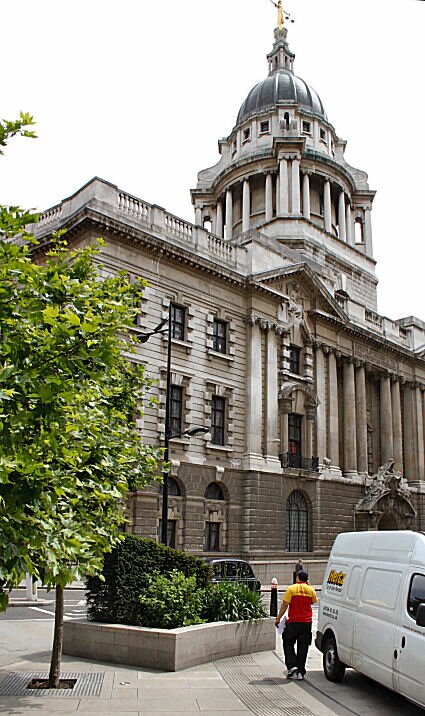 Sources used: I have used original mss and books held at the University Library Cambridge and the British Library London to confirm the accuracy of the information presented. I have also quoted from Thomas Crosby, who produced four volumes in his  "History of the English Baptists," published in London in 1738, 1739, and 1740. For Crosby the term 'Baptist' simply referred  to anyone who baptised by immersion, he did not use it in a sectarian way (preface, vol 1). I have also referred Champlin Burrages's 'The Early English Dissenters', Cambridge University Press, 1912. Other books used have been quoted above.

Copyright - We understand people may wish to copy and use this information, please click here to know what we allow, thank you.